What is Levoconvex Lumbar Scoliosis?

If a person has scoliosis, it means their spine has an unhealthy curve. Looking at a healthy spine from the side, it will have a natural ‘S’ shape. With Scoliosis, the spine deviates from that alignment by bending to the side. If the curve measures more than 10 degrees and includes rotation, this is considered scoliosis. The term ‘levoconvex’ refers to the direction of the curve, and ‘lumbar’ refers to one of the three sections of the spine: the lower back.

Scoliosis is neither simple to treat, nor simple to live with. The spinal deformity can develop at any age and can take many forms. When a patient is diagnosed with scoliosis, their condition is classified in a number of ways: age, cause, location of curvature, and type of curve. These classifications often include Greek or Latin medical terms that not everyone understands; to fully understand what levoconvex lumbar scoliosis is, let’s break down the term word by word.

When we first diagnose a patient with scoliosis, a large part of that process is finding out everything we can about the condition. This is important because there is a huge range of forms the condition can take. 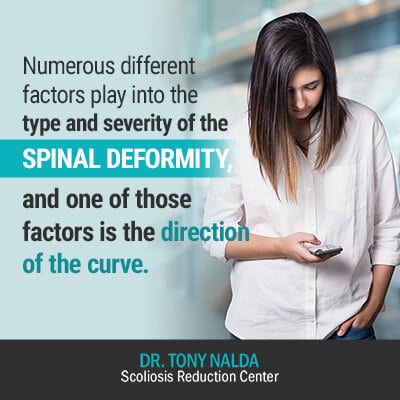 Numerous different factors play into the type and severity of the spinal deformity, and one of those factors is the direction of the curve.

Let’s continue moving along the term and explore what ‘convex’ means.

Adding the word ‘convex’ specifies the type of scoliosis further. We know from the ‘levo’ that the curvature bends to the left, and levo tells us that it’s the curve’s outer edge that’s on the left.

Every spinal curvature has a convex and a concave side. As convex refers to the outside of the curve, ‘concave’ refers to the inside.

So to put the two terms together - levo and convex - we know the curve bends to the left from its outer edge, most likely forming a hard ‘C’ shape.

Why is this Information Important?

Knowing whether a curve bends to the left or right is important not only in terms of treatment, but also in diagnosing the type of scoliosis the patient is dealing with.

As I said earlier, a curve that bends to the right is considered typical, but a levoscoliosis is atypical. 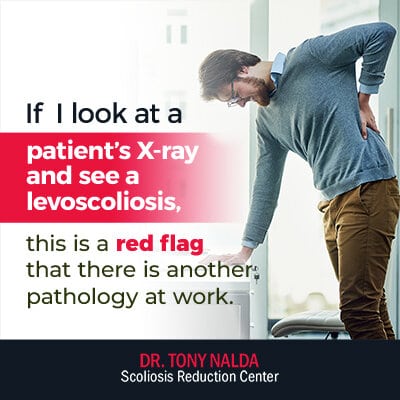 If I look at a patient’s X-ray and see a levoscoliosis, this is a red flag that there is another pathology at work.

In these types of cases, the scoliosis is most often a secondary complication of a larger medical issue. My first step will be ruling out other conditions and pathologies to get to the root of the underlying condition.

Following are some potential causes of levoscoliosis:

Congenital scoliosis - meaning there was a bone malformation present at birth, such as a hemivertebra. This happens when a vertebra is improperly formed and throws off the alignment of the spine.

A healthy spine has its vertebrae stacked on top of one another like bricks; with a hemivertebra, one of those vertebra is shaped like a triangle, instead of a brick, and that causes the spine to slip out of alignment and commonly causes congenital scoliosis.

Neuromuscular scoliosis - when a neuromuscular disease or condition causes a loss of muscle control and sensation, it can lead to the development of an abnormal spinal curvature.

Tumors - if there are tumors pressing against the spine, this can cause levoscoliosis to develop.

Trauma - while rare, a trauma to the spine caused by an accident could also result in the formation of levoscoliosis.

Another important piece of information that’s revealed by the X-ray is where along the spine the scoliosis has developed, and this takes us into the next term in the name: ‘lumbar’.

Basic Anatomy of the Spine

The spine is made up of three main sections: cervical, thoracic, and lumbar.

The spine has three main healthy curves that give it its natural soft ‘S’ shape when viewed from the side. These healthy curves give the spine its strength and flexibility.

If a spine loses its healthy curves and are replaced by bad curves, the overall biomechanics of the spine are affected.

When levoscoliosis is present, the spine will curve to the left in a hard ‘C’ shape, most often, or sometimes in a hard ‘S’ shape; it usually starts in the lumbar spine.

So if a diagnosis of levoconvex lumbar scoliosis is given, you now know it means there is an abnormal sideways curvature to the spine that measures at least 10 degrees including rotation, with the outer edge of the curve bending to the left in the lower back.

What Is Lumbar Scoliosis?

It’s difficult to be on the receiving end of a progressive condition diagnosis. It can be especially difficult when the condition’s name is full of foreign medical terms.

Breaking down levoconvex lumbar scoliosis term by term tells us there is an abnormal curvature present in the spine; it also tells us the outer edge of the curve bends to the left in the lower back.

As a leftward curvature, levoscoliosis is far less common than a scoliosis that bends to the right; estimates of the prevalence of dextroconvex curves in adolescents are as high as 85-90 percent.

In cases of scoliosis curves that bend to the left, this is considered atypical and most often indicates the presence of another pathology.

Here at the Scoliosis Reduction Center, we have experience diagnosing and treating all forms of the condition, including levoconvex lumbar scoliosis.

Our proactive treatment approach can help you, or your loved one, fully understand the condition and achieve a curvature reduction capable of restoring as much of the spine’s healthy curves as possible.

As we work towards restoring the spine’s healthy curves, the overall biomechanics of the spine are improved so the body can function at its best.