Scoliosis looks different from person to person. As a highly-variable spinal condition, it ranges from mild to moderate and severe to very severe. Mild conditions can be difficult to detect because their signs can be subtle; the more severe a condition is, the more likely it is to be visually noticeable.

As an unnatural sideways spinal curve, scoliosis introduces a lot of uneven forces to the body, disrupting its overall symmetry. In adolescents, the earliest signs of scoliosis are uneven shoulders and hips, and in adults, the earliest symptom is pain.

Let’s start our discussion of what scoliosis looks like by first exploring some basic spinal anatomy.

Anatomy of the Spine

A healthy spine will appear straight when looking at it from the front or back and will take on a soft ‘S’ shape when viewed from the sides.

The spine’s healthy curves make it stronger, more flexible, and able to absorb stress, like a coiled spring.

If the spine loses one or more of its healthy curves, its biomechanics are disrupted, and each section of the spine has its own curve, dependent on the health of the others.

The bones of the spine (vertebrae) are stacked on top of one another in a straight and neutral alignment, and as a scoliotic curve develops, the vertebrae at the curve’s apex are becoming more tilted, disrupting the spine’s natural alignment: causing it to become misaligned.

As a progressive condition, scoliosis has, in its very nature to worsen over time, particularly if left untreated or not treated proactively.

When it comes to the question of what does scoliosis look like, the answer will change depending on variables such as patient age, condition type (cause), curvature location, and condition severity.

Whether the signs and symptoms of scoliosis are subtle or overt will largely depend on the angle of trunk rotation and condition severity, which is determined by a measurement known as the Cobb angle.

A patient’s Cobb angle is taken during X-ray and involves drawing lines from the tops and bottoms of the most-tilted vertebrae at the apex of the curve; the intersecting lines form an angle that’s expressed in degrees.

The higher the Cobb angle, the more severe the condition, and the more likely it is to produce noticeable signs/symptoms:

So now that we’ve addressed some basic spinal anatomy and touched on some important condition variables, let’s address the physical signs of scoliosis and how they differ between young and older patients.

Scoliosis is a highly-prevalent spinal condition, with current estimates at close to 7 million people living with scoliosis in the United States alone, and it is the leading spinal condition among school-aged children. 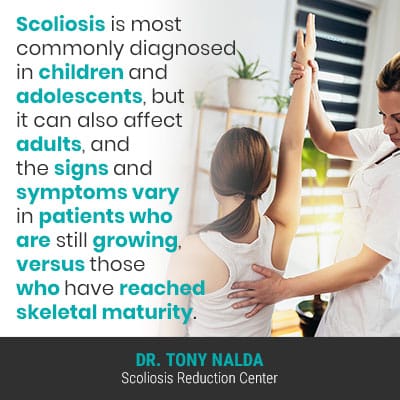 Scoliosis is most commonly diagnosed in children and adolescents, but it can also affect adults, and the signs and symptoms vary in patients who are still growing, versus those who have reached skeletal maturity.

The most prevalent condition type is adolescent idiopathic scoliosis (AIS), diagnosed between the ages of 10 and 18, so this is the form we’re referencing when discussing scoliosis in young patients.

As mentioned, the signs of scoliosis aren’t always easy to notice. In mild cases of AIS, the condition isn’t associated with noticeable physical signs or functional deficits, making early detection a challenge. Still, as it progresses and gets more severe, its signs and symptoms tend to become more noticeable, especially the physical ones.

Physical Signs of Scoliosis in Adolescents

In adolescents, the physical signs of scoliosis disrupt the body’s natural symmetry.

The earliest signs of scoliosis in adolescents are uneven shoulders and hips, and as a condition progresses from mild to moderate, its signs become more noticeable, which is why the majority of my patients are diagnosed at the moderate level. When mild, scoliosis can be difficult for anyone other than an expert trained in the condition’s subtle early signs, to recognize.

In addition, mild scoliosis doesn’t commonly cause noticeable functional deficits, and in children and adolescents who are still growing, the condition isn’t known to be painful, making it even more difficult to detect.

While there are no treatment guarantees, early detection does increase the chances of treatment success, so knowing the condition’s early signs can be the first step down a path that leads to proactive treatment and condition improvement.

So to summarize, the physical signs of scoliosis in adolescents become more noticeable as a condition progresses and can include:

In addition to the more obvious physical signs of scoliosis, the condition’s uneven forces can also disrupt a patient’s gait, balance, or coordination.

While having a single asymmetrical feature doesn’t mean a person has scoliosis, noticing an increasing disruption to an adolescent’s overall symmetry can indicate a need for further testing.

Now let’s address the main ways in which the signs and symptoms of scoliosis differ in adults.

Physical Signs of Scoliosis in Adults 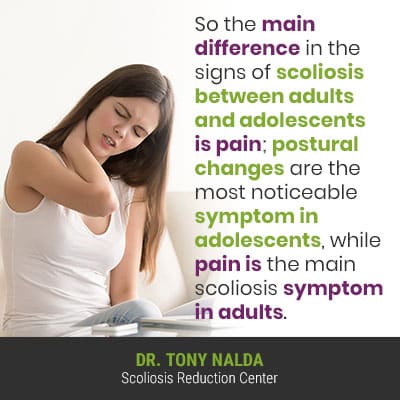 Scoliosis can affect all ages, from infants to the elderly, and every age in between. While scoliosis is more prevalent in children and adolescents, adults experience it too.

The main type of scoliosis to affect adults is idiopathic; idiopathic means we don’t know why the condition initially develops and is thought to be multifactorial, meaning caused by multiple variables that can vary from patient to patient.

Idiopathic scoliosis in adults are cases of AIS that went undiagnosed and untreated through adolescence, progressing with growth and time.

The sad reality is that had these adults been diagnosed and treated proactively in adolescence, their spines would likely be in far better shape than they are by the time they come and see me for a diagnosis and treatment.

The physical signs of scoliosis in adults are similar to those for adolescents: a disruption to the body’s overall symmetry caused by the condition’s introduction of uneven forces.

Adults with scoliosis can have a prominent lean to one side, which becomes more prominent when in a forward-bend position.

Adults can also develop uneven hips, shoulders, a rib arch, an uneven waistline, etc., and due to scoliosis becoming a compressive condition in adulthood, adults can also lose trunk height, making them shorter.

Scoliosis isn’t compressive while the spine is still growing, which is why the condition isn’t known to cause pain in children and adolescents, but the pain is the number-one symptom of scoliosis in adults.

The main reason adults come in to see me for a diagnosis and treatment is because of pain felt in their back, or radicular pain felt in the arms, hands, legs, and feet; this is due to compression.

When the spine is still growing, it’s experiencing a constant lengthening motion, and that motion counteracts the compressive force of the curve, and it’s compression of the spine and its surrounding muscles and nerves that cause the majority of condition-related pain.

Do You Have These 7 Symptoms of Scoliosis?

Scoliosis can vary widely based on a number of patient/condition variables that shape a person’s experience of life with the condition.

Although in the condition’s main type, idiopathic scoliosis, we don’t fully understand its etiology, we most certainly know how to treat it effectively.

A disruption to the body’s overall symmetry is what scoliosis can look like, and depending largely on severity. Those signs can range from subtle to overt.

From mild to moderate, severe to very severe, the postural changes related to the condition, like uneven hips and shoulders, tend to become more pronounced as the condition progresses. The only way to control progression is to apply proactive treatment that addresses the condition’s underlying structural nature.

Here at the Scoliosis Reduction Center, I apply a conservative chiropractic-centered treatment approach to the crafting of customized treatment plans that, first and foremost, impact the condition on a structural level and then focus on increasing core strength, so the spine is optimally supported.

Corrective bracing and a home-rehabilitation program can augment corrective results, which improves postural deviation, making it more difficult to tell whether a person has scoliosis or not.

If you, or someone you care about, is noticing some signs of scoliosis, there’s no harm in going to a doctor for some screening to indicate if further testing is needed. When it comes to progressive conditions like scoliosis, the earlier a condition is detected and the sooner proactive treatment is started, the fewer limits there are to what can be achieved.