ScoliBrace: A Scoliosis Brace That Can Be Worn Under Clothes

The complex nature of scoliosis necessitates a customized approach that involves the integration of multiple forms of treatment. While there are several scoliosis brace options to choose from, not all are created equal. While traditional braces have changed little over the years, modern corrective braces, like the ScoliBrace, represent the culmination of what we have learned about scoliosis bracing and the condition itself.

Just as there are different scoliosis treatment approaches, there are also different types of scoliosis braces. While a traditional brace is designed around stopping progression, a modern corrective brace, like the ScoliBrace, has corrective potential and can easily be worn under clothes.

Before getting into the specific features of the modern ScoliBrace, let’s start our discussion by touching on the different scoliosis treatment approaches, and why a different type of brace is favored by each.

There are two main scoliosis treatment approaches for people to choose between: traditional and conservative. 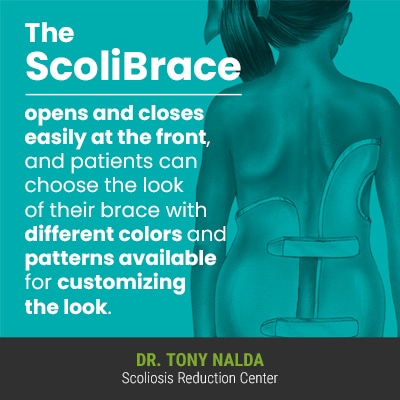 Scoliosis is a progressive spinal condition. In the traditional approach, the end goal of treatment is preventing further progression, but this is not the same as working towards corrective results, which means impacting the condition on a structural level.

The traditional approach is more reactive than proactive as treatment mainly involves watching and waiting for signs of further progression.

Under the traditional approach, a case of mild scoliosis would be observed, and if/when the patient progressed into the moderate severity level, traditional bracing is the only form of treatment applied. After moving into the severe and very-severe classifications, spinal fusion is commonly recommended as the best treatment option.

Under a conservative approach, also commonly referred to as a chiropractic-centered and/or functional approach, a mild condition is seen as an opportunity to use proactive treatment to keep it that way.

Here at the Scoliosis Reduction Center, I favor a conservative approach and initiate treatment as close to the time of diagnosis as possible. My main treatment goals are to achieve a curvature reduction on a structural level, to prevent an increase of the condition severity, related symptoms, and the need for more invasive treatment down the road.

These different responses to the condition’s presence dictate the type of scoliosis brace chosen by each approach, as one focuses solely on preventing progression while the other works towards achieving corrective results while preserving the spine’s overall health and function.

The most popular traditional brace used in the United States remains the Boston brace, while the modern ScoliBrace is the brace of choice for dynamic and modern treatment approaches.

To better understand what corrective bracing offers, let’s compare and contrast the traditional Boston brace with the modern corrective ScoliBrace.

The Boston Brace vs. the ScoliBrace

As mentioned, the design of scoliosis braces is largely governed by their end goal. As a progressive condition, it’s in the nature of scoliosis to worsen over time, especially if left untreated or not treated proactively.

Particularly in the context of scoliosis braces, it’s important to understand that as scoliosis involves the development of an unnatural sideways spinal curve, it also has a rotational component that makes the spine twist from front to back and back to front: making scoliosis a 3-dimensional condition.

The Boston brace is limited in its efficacy because it only addresses the condition as 2-dimensional.

Developed in the 1970s, Boston’s brace design has changed little over the years despite our growing understanding of the condition. It is constructed from hard, durable plastic, wraps around the torso beneath the arms, extends down the rib cage, hips, and lower back.

The Boston brace squeezes the spine from the sides via strategically-placed pads that put pressure along certain points of the scoliotic curve, known as a three-point pressure system.

The idea is that by squeezing the spine from the sides, it will be forced into a straighter alignment, slowing/stopping the scoliotic curve from increasing in size, although this result can never be guaranteed.

While each case is unique, the Boston brace is generally prescribed for full-time wear, meaning between 18 to 23 hours a day, for up to 5 years.

Another shortcoming of the Boston brace is that its squeezing design can actually weaken the spine over time and lead to increased postural deviation. It can also lead to muscle weakness as the brace is supporting/stabilizing the spine, leaving the muscles surrounding the spine weakened due to lack of use.

A big issue with any type of scoliosis brace is compliance, and this is especially true of the Boston because it is mass-produced, meaning not fully customized to suit a patient’s body type and condition.

While certain measurements are taken to make the brace as fitted as possible, the Boston is more of a one-size-fits-all approach, making it bulkier, less comfortable to wear, and only best suited to a specific body type.

When we’re talking about the most prevalent form of scoliosis, we’re talking about adolescent idiopathic scoliosis (AIS) diagnosed between the ages of 10 and 18, and as this age group is not exactly known for transparency and compliance, wearing the brace as prescribed isn’t always realistic. 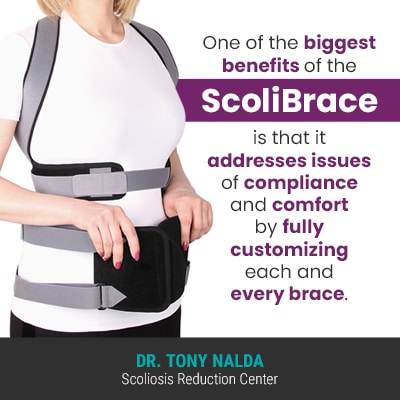 One of the biggest benefits of the ScoliBrace is that it addresses issues of compliance and comfort by fully customizing each and every brace.

The ScoliBrace represents the culmination of what we have learned about scoliosis and bracing efficacy as a form of treatment, including addressing the shortcomings associated with traditional scoliosis braces.

The design of the ScoliBrace reflects its end goal of achieving corrective results: reducing the unnatural spinal curve, and realigning the spine on a structural level.

Here at the Center, when appropriate, I favor the ScoliBrace because correction and function is the ultimate goal of my treatment approach.

By integrating multiple treatment disciplines, I can fully customize treatment plans and adjust the course of treatment as needed, based on how the spine responds.

While there are never treatment guarantees, and bracing alone wouldn’t be enough to impact the condition on multiple levels, they can complement one another for the best potential results when combined with other effective forms of treatment.

The ScoliBrace has an over-corrective design that pushes rather than squeezes the spine/body into a corrective position that counteracts the scoliotic curve while preserving the spine’s strength and function.

The ScoliBrace opens and closes easily at the front, and patients can choose the look of their brace with different colors and patterns available for customizing the look.

As postural changes are the most common symptoms of scoliosis in adolescents, the ScoliBrace, as it works to reduce the unnatural spinal curve, is also known to address related postural asymmetries such as uneven shoulders, an uneven waistline, and the presence of a rib arch.

An important factor to keep in mind is that while traditional braces only address the curve on two dimensions, ignoring the rotational component of scoliosis, the ScoliBrace treats it as 3-dimensional to impact the condition on all dimensions; this is accomplished by 100-percent customizing each and every brace to suit the specifics of a patient’s body and curvature type.

The ScoliBrace is made through Computer-Aided Manufacture (CAM), and its design relies on Computer-Aided Design (CAD) and BraceScan, state-of-the-art fully-body laser-scanning technology. It combines those measurements/images with other postural photos and X-ray images to ensure braces are bespoke to their individual wearers.

The time and effort that goes into the measuring and design of each individual brace make the ScoliBrace more corrective, comfortable to wear, and easier to move in, meaning less activity restrictions: all aspects that improve compliance.

Remember, regardless of the type of brace, if it’s not being worn as prescribed, it won’t be effective, and I want my patients to benefit from a stronger and more functional spine throughout treatment and beyond. A conservative chiropractic-centered treatment approach, and the ScoliBrace, can work towards those results.

So when it comes to a scoliosis brace that can be worn under clothes, while this can be done with both traditional and modern braces, the ScoliBrace’s design encourages compliance through correction and comfort.

While traditional braces, like the Boston, have their place in scoliosis treatment, the modern ScoliBrace offers a different potential outcome, and this is largely based on the different end goals the braces are designed to deliver: preventing progression versus correction.

While the Boston squeezes the spine to force it into a better position, it’s only doing this in 2 dimensions (side to side), but as scoliosis is a 3-dimensional condition, for corrective results, it needs to be addressed from side to side and front to back.

The ScoliBrace guides the spine and body into better positioning by pushing rather than squeezing the spine, and when combined with other forms of proactive treatment, scoliotic curves can be reduced and spine’s can be realigned, all while preserving the spine’s overall health and function.

Here at the Scoliosis Reduction Center, I spend a lot of time with patients, and their families, just discussing the different treatment options available to them. This is so important because patients need to ensure their treatment expectations are aligned with the realities of their potential outcomes.