20 Degrees Scoliosis - What To Do? What Happens Next?

Scoliosis is a highly-variable condition, meaning no two patients will have the same experience of life with the condition, and a large part of that is based on condition severity: mild to moderate and severe to very severe. Continue reading to learn what 20 degrees of scoliosis means and how it’s measured.

Part of diagnosing scoliosis involves further classifying conditions based on specific patient/condition variables; curvature degree determines condition severity, and 20 degrees of scoliosis would fall within the 10 to 25-degree range as mild scoliosis.

Before moving on to the specifics of mild scoliosis, let’s first discuss the basics of a scoliosis diagnosis.

The spine’s natural curves make it stronger, more flexible, and better able to handle the rigors of everyday life.

A person can develop a number of spinal conditions that involve a loss of one or more of the spine’s healthy curves. This disrupts the biomechanics of the entire spine as each curve is dependent upon the health of the others.

Being diagnosed with scoliosis means that an unnatural sideways spinal curve has developed, with rotation, meaning it doesn’t just bend unnaturally to the side, but also twists from front to back, back to front, making it a 3-dimensional condition.

In addition, to be considered true scoliosis, the unnatural spinal curve has to be of a minimum size, and this leads us to what’s commonly referred to as the orthopedic gold standard in the assessment/diagnosis of scoliosis: Cobb angle.

A patient’s Cobb angle is determined during X-ray by drawing intersecting lines from the tops and bottoms of the most-tilted vertebrae (bones of the spine) at the apex of the curve; the resulting angle is expressed in degrees and places scoliosis on its severity scale of mild to moderate, severe to very severe:

In addition, there are two main scoliosis treatment approaches to choose between: traditional and conservative, and it’s important to understand the difference because each approach offers a different potential outcome.

Traditional is Watch and Wait

The traditional approach to scoliosis treatment has been in place for many years, but despite our growing understanding of the condition and how it responds to different forms of treatment, it has changed little over those years. 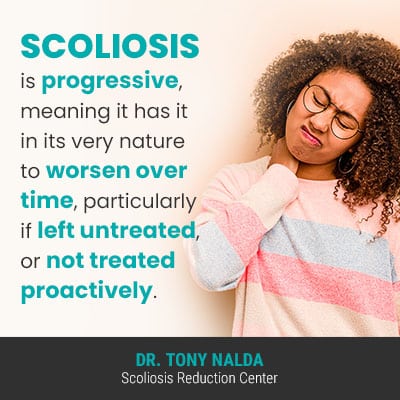 Scoliosis is progressive, meaning it has it in its very nature to worsen over time, particularly if left untreated, or not treated proactively.

Why Watch and Wait is Bad

Now, the most prevalent form of scoliosis is adolescent idiopathic scoliosis (AIS), diagnosed between the ages of 10 and 18, so we’ll focus on this condition-type throughout the article.

Although the idiopathic designation means we don’t understand why it develops initially, we do understand what makes it progress: growth and development.

It’s also important for patients, and their families, to remember that fully understanding the etiology of idiopathic scoliosis wouldn’t necessarily change the course of treatment or its outcome; what’s more important is how the condition is responded to once it’s developed.

So considering the age and stage of puberty, marked by rapid and unpredictable growth spurts, it’s highly likely that an adolescent with mild scoliosis who is in, or is entering, the puberty stage will have significant growth spurts in between checkups. To me, this is wasting valuable treatment time.

As a progressive condition, we know virtually every case of scoliosis is going to get worse, particularly in adolescents, because of the growth trigger, so why simply observe for progression rather than apply proactive treatment to prevent progression and an increase in condition severity?

What the traditional approach is known for is watching and waiting until a condition has progressed past the surgical-level threshold and recommending spinal fusion surgery as the best remaining option, but as they made no attempt at proactive treatment earlier in the condition’s progressive line, this is akin to funneling patients in the direction of scoliosis surgery.

While spinal surgeons have their patients’ best interests at heart, scoliosis surgery is invasive, costly, and comes with some heavy potential risks and side effects.

Remember, where a condition is at the time of diagnosis, even if mild, is not indicative of where it will stay, and while there are no treatment guarantees, early detection does increase the likelihood of treatment success, but only if early detection is coupled with the application of proactive treatment.

It’s simpler to treat scoliosis while it’s mild, before spinal rigidity has increased alongside progression, and before the body has had ample time to adjust to the unnatural spinal curve’s presence.

Fortunately, there is a non-surgical treatment alternative with proven results.

A conservative scoliosis treatment approach, also known as functional or chiropractic-centered, would respond to a diagnosis of mild scoliosis with proactive treatment applied as close to the time of diagnosis as possible.

Here at the Scoliosis Reduction Center, a patient with a 20 degrees scoliosis would be taken seriously; at 25+ degrees, the threshold into moderate scoliosis has been crossed, and this is where the majority of my patients are because it’s not always easy to spot the condition when mild; symptoms tend to become more noticeable when moderate. 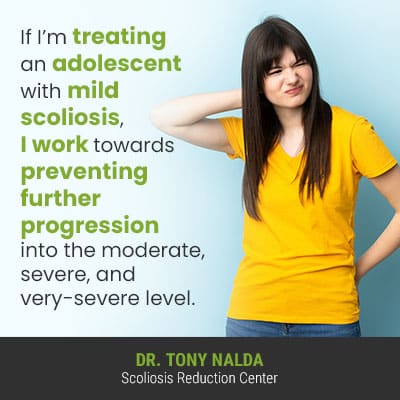 If I’m treating an adolescent with mild scoliosis, I work towards preventing further progression into the moderate, severe, and very-severe level.

While monitoring for progression is still an important focus of my treatment approach, it's not the sole response; I integrate condition-specific chiropractic care, in-office therapy, custom-prescribed home exercises, and corrective bracing.

Through chiropractic care, first and foremost, I want to impact scoliosis on a structural level, by adjusting the most-tilted vertebrae back into alignment with the rest of the spine, thus restoring as much of the spine’s healthy curves as possible.

Through a variety of therapies and the prescription of scoliosis-specific exercises (SSEs), I can help patients increase their core strength, so the spine is optimally supported and stabilized by its surrounding muscles.

In addition, certain SSEs are known to activate specific areas of the brain for postural remodeling and improved body positioning.

When successful, conservative treatment can help prevent progression, stabilize the spine through future growth, and impact the condition on a structural level in the form of a curvature reduction.

So what should a person do after a 20 degrees scoliosis diagnosis: seek out proactive treatment.

The time to start treatment is always now, particularly when it comes to the progressive nature of scoliosis.

When it comes to a scoliosis diagnosis, the most important decision to be made is how to treat it moving forward because the two main scoliosis treatment approaches offer patients different potential outcomes.

Under a traditional treatment approach, patients diagnosed with a 20 degrees of scoliosis fall under the umbrella of mild scoliosis, and in the majority of cases, these patients are told merely to watch and wait.

The danger of solely watching and waiting is that it’s more reactive than proactive, wastes valuable treatment time, and does nothing to prevent increasing condition severity, escalating symptoms, and the need for invasive treatment in the future, such as spinal fusion surgery.

Under a conservative treatment approach, patients diagnosed with a 20 degrees of scoliosis benefit from proactive treatment initiated as close to the time of diagnosis as possible; that way, work is started immediately to counteract the condition’s progressive nature.

There are never treatment guarantees; however, when successful, proactive treatment can spare patients the hardships associated with progression and the need for invasive treatment in the future.

By customizing treatment plans that integrate different forms of treatment, conditions can be impacted on multiple levels for the best potential results, as I help patients work towards a curvature reduction and increasing core strength for optimal spinal support and stabilization.