Lordosis Vs Kyphosis: The Differences & Similarities

The spine allows us to stand upright, practice good posture, engage in flexible movement and gives the body structure. In addition, the spine works in tandem with the brain to form the body’s central nervous system (CNS). For a spine to remain healthy and function optimally, it needs to maintain its natural curvatures and alignment, but spinal conditions like lordosis and kyphosis involve a loss of its healthy curves and can impact the spine’s overall health and function.

There are many different types of spinal conditions that involve a loss of its healthy and natural curvatures; lordosis and kyphosis are two such conditions. While lordosis involves an exaggerated inward curvature of the spine, kyphosis is an over-pronounced outward spinal curvature.

Let’s start our discussion of lordosis and kyphosis by first touching on some basic spinal anatomy, as this gives us a better understanding of how the conditions can affect the spine and body.

The human spine has three main sections: cervical (neck), thoracic (upper/middle back), and lumbar (lower back). Each of these sections have a characteristic curvature type that helps the spine perform optimally.

Just as the spine has different sections consisting of different numbers of vertebrae (spinal bones), each section is associated with a different curvature type. The spine’s natural curvatures bend inwards, towards the body’s center, or outwards, away from the body’s center.

When either of these curvature types become over-pronounced, the conditions are known either simply as lordosis and kyphosis and are used interchangeably with the terms hyperlordosis and hyperkyphosis.

There is a natural range of lordosis and kyphosis in healthy spines, but when those curvature degrees fall beyond a normal range, the spine’s biomechanics are disrupted, which can affect the body in different ways.

Healthy spines have a cervical lordosis range of between 20 and 40 degrees, while lumbar lordosis has a range of 40 to 60 degrees. A healthy thoracic kyphosis range would fall in the 20-to-40 degree range.

If left untreated, abnormal spinal curvatures tend to worsen over time, so being proactive is key. Here at the Scoliosis Reduction Center, I believe in starting treatment as close to the time of diagnosis as possible; that way, we are addressing abnormal spinal curvatures while they are at their smallest, before they have progressed significantly, are less complex to treat, and before the body has had time to adjust to their presence.

Now that we know the terms lordosis and kyphosis refer to the spine’s natural inward and outward curvature types, and conditions that involve those curvature types being over-pronounced, let’s move on to discussing the similarities of, and differences between, these conditions.

While lordosis and kyphosis are spinal conditions that involve a loss of the spine’s healthy and natural curvatures, the types of curvature are different.

As mentioned, lordosis describes the spine’s inward curvatures, so when a lordotic curve becomes over-exaggerated, lordosis, also known as swayback, can affect the body’s posture and symmetry by causing the abdomen to protrude and the buttocks to stick out.

As kyphosis refers to the spine’s inward curvatures, when a kyphotic curve becomes exaggerated, it can cause a forward shift in posture that gives the upper back a pitched-forward rounded appearance with a noticeable arch.

While both conditions involve an over-exaggeration of the spine’s natural curvatures, because of the different curvature types, these conditions affect the body’s posture and overall symmetry in different ways.

So we know that these two conditions affect the body’s appearance differently, but what about other symptoms?

Symptoms of Lordosis Vs Kyphosis

While different spinal conditions can produce similar symptoms, particularly in terms of back and muscle pain, and postural changes, as they develop in different areas of the spine, they can also produce varying symptoms.

While every case is different and will produce its own unique set of symptoms and treatment needs, common symptoms of lordosis include:

When the spine is abnormally curved in one location, it disrupts the biomechanics of the entire spine, but as you can see, different curvature locations and curvature types affect certain areas of the body differently, thus producing different symptoms.

Now that we have discussed lordosis and kyphosis in terms of what a healthy and unhealthy range is, plus common symptoms associated with each, let’s address a common related question: can you have both kyphosis and lordosis?

Can You Have Both Kyphosis and Lordosis? 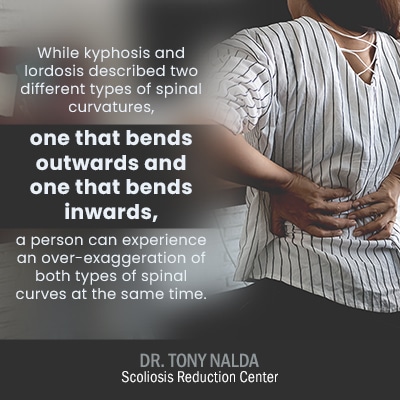 As each involves different sections of the spine, kyphosis most commonly affecting the thoracic spine, while lordosis typically develops along the lumbar spine, it is possible to have over-pronounced kyphotic and lordotic curves simultaneously.

In fact, the spine commonly responds to the development of unnatural spinal curvatures by putting in counteractive curves, which is why one unhealthy and unnatural curve can disrupt the biomechanics of the entire spine.

When the biomechanics of the spine are disrupted, this means it is not functioning optimally, and if left untreated, the spine’s overall health can be impacted.

The spine is a complex and crucial part of human anatomy, and as such, there are a number of conditions that can affect it.

As the spine’s healthy curvatures allow it to perform optimally, conditions that involve a loss of those healthy curves can affect the spine, and other areas of the body, in a myriad of ways.

While lordosis is a term used interchangeably with hyperlordosis, meaning an exaggerated inward curvature of the lower back, and kyphosis and hyperkyphosis describe an over-pronounced outward curvature of the upper back, it it is also possible to have both conditions at the same time.

While the conditions involve different curvature types that develop along different areas of the spine, they can produce both similar and dissimilar symptoms, and there are different types of both conditions that can develop related to causation.

The most common type of kyphosis is postural, meaning it’s not a structural condition and can be treated simply by addressing the bad habits that cause the temporary curvature to develop, such as chronic bad posture.

Other types of kyphosis are structural and more complex to treat, such as Scheuermann’s and congenital kyphosis: caused by structural abnormalities within the spine itself.

The most prevalent forms of lordosis are postural, congenital, neuromuscular, and post-surgical.

With the different conditions, treatment needs will vary and depend on a number of important patient and condition characteristics such as condition severity and causation, as a condition’s underlying cause is typically the driving force behind treatment.

Here at the Scoliosis Reduction Center, I have successfully treated a wide range of spinal conditions, including lordosis, kyphosis, and scoliosis.

I work closely with my patients to craft customized and effective treatment plans that address a condition’s underlying cause, when known, and important condition and patient characteristics.

While no treatment results are ever guaranteed, being trained and experienced in multiple treatment modalities means patients of the Center can benefit from the results offered by different forms of treatment, integrated in such a way that they complement one another and offer patients the best possible prognosis.