Kyphoscoliosis: What Is It, Symptoms, Diagnosis, & Treatment

There are many types of singular spinal conditions a person can develop and combinations where more than one spinal issue is present. Scoliotic curves are sideways spinal curves with rotation, and kyphosis occurs when the spine’s outward curvature becomes excessive, causing a roundback appearance.

Let’s start our discussion of kyphoscoliosis by breaking down the term: kyphosis and scoliosis.

The term kyphoscoliosis is a combination of two terms: kyphosis and scoliosis.

Many spinal conditions involve a loss of one or more of the spine’s natural curvatures, kyphosis being one of them.

There are three main spinal sections: cervical (neck), thoracic (middle/upper back), and lumbar (lower back).

When a person is diagnosed with kyphosis, also known as hyperkyphosis, the spine has an exaggerated outward curvature, which gives the body a pitched-forward posture as the thoracic spine’s over-pronounced kyphosis rounds the upper back and shoulders excessively.

There are different types of kyphosis with different causative sources, and the three most common are postural, Scheuermann's, and congenital kyphosis.

Treatment needs for kyphosis will depend on the severity and type in question.

Due to the postural changes kyphosis can cause, the condition is often referred to as roundback.

If a person is diagnosed with scoliosis, it means they have developed an unnatural sideways spinal curve, with rotation, which makes it a 3-dimensional condition.

The rotational element means a scoliotic spine doesn’t just bend unnaturally to the side, but also twists unnaturally from front to back, back to front.

In addition, a scoliotic curve has to be of a minimum size to be officially diagnosed as scoliosis: Cobb angle measurement of 10+ degrees.

A patient’s Cobb angle is obtained via X-ray by drawing intersecting lines from the tops and bottoms of the most-tilted vertebrae at the curve's apex.

The resulting angle is measured in degrees and places conditions on a severity scale of mild, moderate, severe, or very severe:

Just as there are different types of kyphosis, the same can be said of scoliosis.

The most prevalent form of scoliosis is idiopathic, meaning not clearly associated with a single clear causative source, and this type accounts for 80 percent of known diagnosed scoliosis cases in the United States; the remaining 20 percent are associated with known neuromuscular, congenital, degenerative, or traumatic causes. 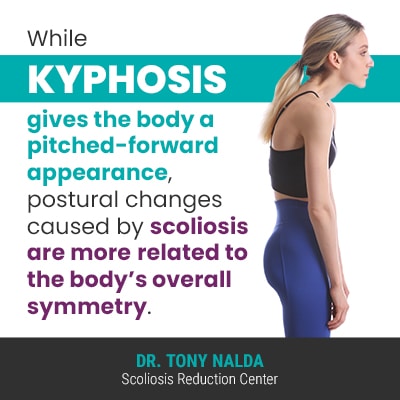 While kyphosis gives the body a pitched-forward appearance, postural changes caused by scoliosis are more related to the body’s overall symmetry.

As scoliosis introduces a lot of uneven forces to the body, its main visual symptoms are uneven shoulders, shoulder blades, a rib arch, uneven hips, and arms and legs that appear to hang at different lengths.

So now that we know what kyphosis is and what scoliosis is, let’s address the specific symptoms associated with kyphoscoliosis.

While each case is unique and shaped by important condition/patient variables such as patient age, overall health, condition type, severity, and curvature location, kyphoscoliosis's most common physical symptoms are a rounded forward or asymmetrical back.

In addition, the condition tends to come with additional symptoms, including:

In cases of severe kyphoscoliosis, and/or particularly if left untreated or not treated proactively, additional symptoms can include:

While people often assume that the majority of symptoms caused by spinal conditions would be confined solely to the back, that's not the case.

The spine is the body’s main support structure. It also works in tandem with the brain to form the central nervous system (CNS), which facilitates brain-body communication; this means the spine is involved in virtually every working system within the body.

Spinal conditions that change the spine’s structure and function have the potential to cause far-reaching effects felt throughout the body, especially when there is significant nerve involvement.

While kyphoscoliosis most commonly affects the thoracolumbar (lower thoracic/upper lumbar) spine, it can also be found in the cervicothoracic (lower cervical/upper thoracic) region.

So now that we understand the two conditions present in kyphoscoliosis, let’s talk about how it’s diagnosed.

How is Kyphoscoliosis Diagnosed?

While there are no treatment guarantees, there are numerous benefits associated with early detection that can increase the chances of treatment success.

Here at the Scoliosis Reduction Center, I have experience diagnosing, assessing, and treating a variety of spinal conditions, kyphoscoliosis included.

In most cases, kyphoscoliosis is diagnosed through a comprehensive physical exam, including taking a patient’s medical/family history and observing patients’ posture and gait; I can tell a lot about a patient’s condition by the way they walk.

In addition, when there is postural deviation related to a spinal condition, it’s often easiest to detect when the patient is in a forward-bend position, so I often conduct what’s called an Adam’s forward bend test.

The Adam’s test is a screening exam that looks for indicators of postural deviation, trunk rotation, and general asymmetries in and around the back; for example, the presence of a rib arch is a typical sign that further testing should be done.

If a physical exam has shown indicators for kyphoscoliosis and the need for further testing, I would perform an X-ray and take a number of comprehensive measurements to further classify the condition.

In severe cases, or when the symptoms include neurological issues, neurological function and/or signs of muscle wasting/weakness are also assessed. 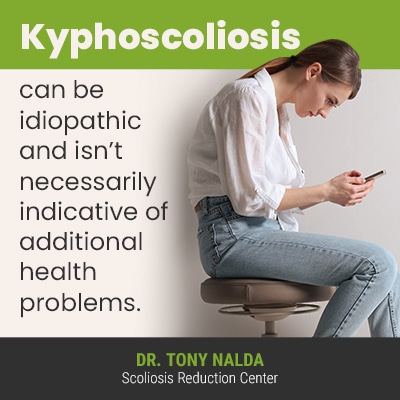 Kyphoscoliosis can be idiopathic and isn’t necessarily indicative of additional health problems. In children, mild kyphoscoliosis is generally monitored over time for signs of further progression.

Clinical impact is determined by condition severity, curvature location, the number of affected vertebrae, and the degree of rotation.

After receiving a kyphoscoliosis diagnosis, the most important decision is how to treat it moving forward to prevent further progression and increasing condition severity.

Treatment plans for kyphoscoliosis need to be customized. These will depend on a number of variables: severity, whether or not healthy posture can be maintained, patient age, and the condition’s underlying cause.

An important aspect of treatment, especially in children and adolescents, is monitoring for changes to the spine: how the spine is responding to treatment, watching for signs of progression, and increasing condition severity.

Here at the Center, I offer a conservative chiropractic-centered treatment approach that believes in the merits of proactive treatment initiated as close to the time of diagnosis as possible.

I integrate multiple forms of treatment so I can fully customize each and every treatment plan to address key patient/condition characteristics.

Through condition-specific chiropractic care, I can work towards adjusting the most-tilted vertebrae back into a healthy alignment with the rest of the spine.

With a combination of in-office physical therapy and custom-prescribed home exercises, I can help patients work towards increasing spinal flexibility and core strength so the spine is optimally supported and stabilized.

Corrective bracing can also be an effective means of preventing kyphoscoliosis from getting worse, and achieving corrective results.

In terms of spinal health and function, maintaining the spine’s natural and healthy curvatures is key to optimal spinal biomechanics.

In order for the spine to perform optimally, it needs to be aligned, meaning the vertebrae are stacked on top of one another in a straight and neutral alignment.

Once a vertebra, or more than one, falls out of alignment, the spine can’t perform as it was designed to, which means the spine cannot absorb/distribute mechanical stress, is more rigid, and will degenerate faster.

Two spinal conditions that involve a loss of the spine’s healthy curves are kyphosis and scoliosis.

Kyphosis affects the thoracic spine’s outward curvature, becoming excessive and causing the upper back and shoulders to become excessively rounded.

Scoliosis is an unnatural sideways spinal curve with a rotation that disrupts the body’s overall symmetry due to the uneven forces it introduces to the body.

As you can see with kyphoscoliosis, a combination of two conditions, it’s also possible for the spine to develop multiple issues, and particularly once the spine starts to degenerate, its ability to maintain those natural curvatures and alignment becomes harder with age.

Symptoms of kyphoscoliosis include a roundback appearance, a disruption to the body’s overall symmetry, postural deviation, issues with balance and coordination, changes to gait, ill-fitting clothing, and varying levels of back, muscle, and nerve pain.

Here at the Scoliosis Reduction Center, I treat my kyphoscoliosis patients by first assessing their conditions comprehensively, and then crafting a customized treatment plan driven by the underlying cause.