How is Scoliosis Named?

When a scoliosis diagnosis is given, there are multiple classification points that determine how scoliosis is named. The four variables that classify a condition are type of curve, age of patient, size of curve, and location of curve. When a patient’s scoliosis is named based on these characteristics, anyone involved in the care or treatment of the patient will know the most important factors affecting the condition.

The process by which scoliosis is named is important because it classifies the condition so it can be clearly understood by the patient, their families, and anyone involved in their care or treatment. The first classification point is the type of curve, and this is related to the condition’s cause, if known.

The type of curve is the first portion of the name that classifies a patient’s condition. When it comes to determining the type of curve, this is connected to the condition’s cause. In the majority of scoliosis cases, the cause is unknown, leading to our first type of condition: idiopathic.

When a patient’s condition is classified as idiopathic, that means the condition can’t be connected to a single cause. Instead, idiopathic scoliosis is often described as having multifactorial causation, meaning it’s thought to develop as a result of a combination of multiple variables. 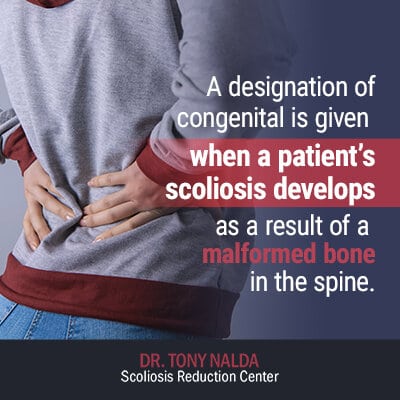 The next category of curve type is congenital. A designation of congenital is given when a patient’s scoliosis develops as a result of a malformed bone in the spine. When I explain congenital scoliosis, I like to describe the vertebrae of the spine as rectangular-shaped bricks, and when one of those vertebra is shaped like a triangle, instead of a brick, a shift in the spine’s alignment can take place, leading to the development of scoliosis.

When the curve is caused by some type of neuromuscular syndrome, such as cerebral palsy, the central nervous system and muscular control is affected. With neuromuscular scoliosis, the abnormally curved spine develops as a secondary complication of a more serious syndrome.

When an adult develops scoliosis fresh in adulthood with no prior history, this is classified as ‘adult de novo’ and makes up the fourth type of curve designation.

The next classification point in the name is age of patient.

After the type of curve, determined largely by cause, comes the age of the patient. There are four categories here: infant, juvenile, adolescent, and adult. 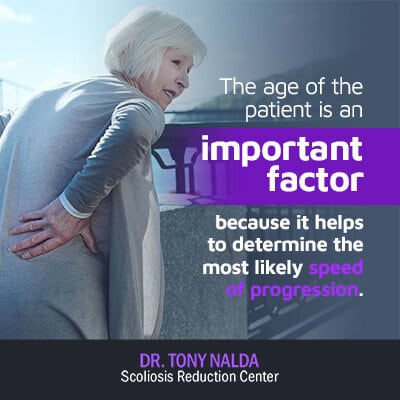 The age of the patient is an important factor because it helps to determine the most likely speed of progression. As the number one cause of curvature progression is growth, patients who’ve not yet reached skeletal maturity have different treatment needs as their condition is far more likely to progress rapidly.

It’s hard to imagine, but scoliosis curves can vary in size from as small as 10 degrees all the way into the 100s. Obviously, this is an important classification point as it reveals the severity of a patient’s condition, which also greatly affects treatment moving forward.

The size of the curve is determined through a measurement, obtained via X-ray, known as the ‘Cobb angle’. The Cobb angle is taken by measuring the most-tilted vertebrae that make up the apex of the curve. The Cobb angle places a condition on the severity scale of mild, moderate, or severe.

In addition to the Cobb angle, a scoliosis X-ray also tells us where along the spine the curvature is located, making up the last classification point that determines how a patient’s condition is named.

The spine is made up of three main sections: cervical (upper back and neck), thoracic (middle back), and lumbar (lower back). While scoliosis can develop anywhere along the spine, it’s most common in the thoracic portion.

The location of the curve is important because it tells us where along the spine our adjustment efforts need to be concentrated. It also helps give us an idea of potential symptoms and rates of progression that are associated with different locations along the spine.

The location is determined by where along the spine the curve’s apex is.

The Final Name of a Patient’s Condition

After a scoliosis X-ray is performed, I know everything I need to know about a patient’s condition in order to design a treatment plan moving forward. Once we’ve determined the type of curve, age of patient, size of curve, and curve location, we can fully name their condition.

The named condition can be something along the lines of ‘idiopathic adolescent mild thoracic scoliosis’ or ‘neuromuscular juvenile severe thoracic scoliosis’. You can see the order of the information that’s included and how the name communicates the condition’s most important characteristics.

If a patient has two curves, each curve will be named separately such as ‘severe  thoracic’ and ‘mild lumbar’.

You won’t have a condition described as both idiopathic and congenital; a condition will only be given one designation at a time. There are cases of syndromes that can have congenital malformed  bones, but the syndrome will take priority in the final classification/naming of the condition.

As a scoliosis specialist, when I give a patient a diagnosis, I want them to understand as much as possible about their condition. The first step is naming and classifying the condition based on its most important characteristics: type of curve, age of patient, size of curve, and location of curve.

The final name a patient’s scoliosis is given is important because it contains the most notable characteristics of that individual’s condition. This helps anyone involved in the care or treatment of that patient as they are immediately privy to the condition’s defining characteristics.

These characteristics are important because they determine the symptoms a patient is most likely to experience, the likeliest rate of progression the patient will face, where treatment efforts need to be concentrated, as well as how intense that treatment will need to be.

The classification points that determine how scoliosis is named reflects the wide variance the condition is known for; scoliosis can affect all ages and ranges in severity from mild to severe, with vastly different rates of progression and experienced symptoms. Naming a patient’s condition by this process helps narrow down that variance and describe the individual patient’s condition.

Here at the Scoliosis Reduction Center, I’ve worked with patients of all ages and severity levels. Part of the reason our treatment approach is so successful is because our practice has experts in a variety of treatment disciplines; that way, we can fully customize each and every treatment plan to suit the patient’s individual needs and condition type.