Most people have heard of or have a basic understanding of what scoliosis is; that alone is a good indication of its commonality. But, how common is scoliosis?

According to the National Scoliosis Foundation, 2018 estimates found more than four million people diagnosed with scoliosis in the United States. Add the rest of the world to that estimate, plus the number of undiagnosed cases, and those numbers tell us something: there are an awful lot of people currently living with scoliosis.

How Common Is Scoliosis? Scoliosis Estimates

Scoliosis is more common than most people think. In fact, 20 percent of the total number of spinal deformities in the United States are people living with scoliosis. Scoliosis is also the most common spinal deformity amongst school-aged children.

Those are some big numbers, and again, we’re just talking about the United States. Now that we’ve discussed the numbers, let’s take a look at who makes up those numbers.

The Most Common Types of Scoliosis

By far, the largest group of people diagnosed with scoliosis are pre-adolescents and teens, and this makes up the ‘adolescent scoliosis’ group. Approximately 29,000 scoliosis surgeries are performed on adolescents yearly in the United States alone. To break that down further, that averages out to 80 surgeries a day.

The ‘adolescent scoliosis’ group make up the bulk of those diagnosed with idiopathic scoliosis.

What we do know is that scoliosis should be understood as a symptom of another cause, or multiple causes. There are so many factors that could contribute to the progression of spinal curvature, and many of those factors are unknown. Just as there are multiple potential causes of the condition, there are also multiple forms of and approaches to treatment that should be considered.

Adolescent idiopathic scoliosis, also known as AIS, is the most common form of scoliosis. Four-to-five percent of adolescents are affected by AIS. The biggest challenge associated with adolescent scoliosis is diagnosing it early enough to start treatment before a large curvature progression has occurred. 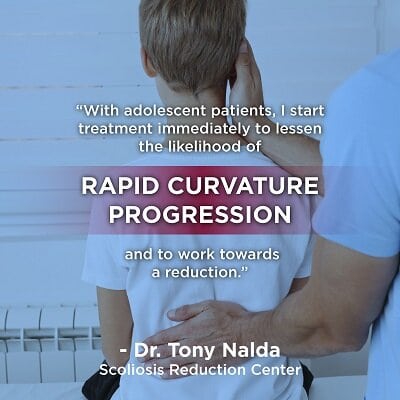 With adolescent patients, I start treatment immediately to lessen the likelihood of rapid curvature progression and to work towards a reduction.

Why is it so hard to diagnose adolescent scoliosis? While my patients around 40 and up experience pain with their condition, in most adolescent cases, there is an absence of pain, which makes it hard for patients, caregivers, parents, and even doctors to notice.

Pain is a great communicator and serves a vital function; it tells us when something is wrong in the body. With adolescent scoliosis, there is an absence of compression on the spine as the spine is continuously growing upwards. Adults with scoliosis who have stopped growing experience pain because the spine tends to compress causing pressure and discomfort.

I like to remind parents and caregivers that during adolescence, most young people become extra private and less likely to share concerns about their bodies. As their advocates, I advise you to educate yourselves on what to look for and take teens in for scoliosis screening at least once a year.

Symptoms to Watch for:

Early diagnosis only increases treatment options, whereas watching and waiting, especially through the puberty stage, can be harmful as curvatures continue to progress unimpeded. Growth spurts in patients with scoliosis result in rapid curvature progression.

In treating my adolescent patients, my goal is to start treatment as soon as possible to lessen the likelihood of rapid curvature progression and work towards achieving a reduction. Unfortunately, there is no known cure for scoliosis, which means an abnormal curvature will not correct itself but left untreated, it can most definitely get worse.

This is the issue I have with traditional treatment advice of watching and waiting. A scoliosis specialist might diagnose a 12-year-old girl with a 15-degree curve and tell her and her parents that she has a case of mild scoliosis.

Most likely, the parents of that girl would say, “What should we do next?” This is where my approach would take that patient and her parents down a different path. A specialist that favors the traditional treatment approach would likely say something along the lines of, “It’s mild for now, so let’s wait and see if the curve progresses. We’ll take another X-ray in three-to-six months.”

During that three-to-six month period of waiting, that girl could have a rapid growth spurt, and her curvature could progress just as rapidly at the same time. Fast-forward three-to-six months when they X-ray her again, and that doctor could say, “Whoa, the curvature has progressed to a 25-degree curve. Now, we should talk about surgery.”

My argument is what harm would it have done to start treatment when that curvature was first assessed at 15 degrees? During that time, me and my team at the Scoliosis Reduction Center could have created a customized treatment plan that involves strengthening the patient’s spine in a functional approach. That treatment could have slowed the curvature’s progression or halted it. At the very least, those parents would not have the guilt of wondering, “What would have happened if we had acted sooner instead of waiting?”

Only 20 Percent of Scoliosis Cases Have a Known Cause

You might be wondering, “If 80 percent of diagnosed scoliosis cases have no known cause, what are the other 20 percent caused by?”

Scoliosis defined as neuromuscular refers to when there is a disconnect between the nerves and muscles of the body. Conditions like muscular dystrophy and cerebral palsy are known causes.

Scoliosis that was caused by severe trauma is most often the results of serious car accidents or falls.

Degenerative scoliosis is most common in older people and develops when spinal discs have degenerated over time.

Congenital scoliosis is the result of the inability of the body’s bones to form properly.

Many people wonder how common scoliosis can be within a family. If someone’s grandfather had it, does that mean it will be passed down to future generations? The answer to that is there is no known single gene responsible for causing scoliosis and it  is not hereditary.

There is, however, a potential familial connection that could be understood as the result of a genetic predisposition, or a variety of other shared factors such as geographic location, similar lifestyle choices, posture and stresses.

A person could be carrying the scoliosis gene but not develop the condition, while someone else without the gene could develop it, which supports what we know of scoliosis as having multifactorial causation.

The bottom line is that one person in your family having scoliosis does not mean anyone else will develop the condition. There have been numerous twin studies done that show one twin developing the condition, but not the other, or twins with wildly different curvatures.

With a staggering 80 percent of scoliosis cases defined as idiopathic, people continue to look for known causes. When it comes to genetic factors and scoliosis, existing evidence and studies don’t support the genetic inheritability of the condition. 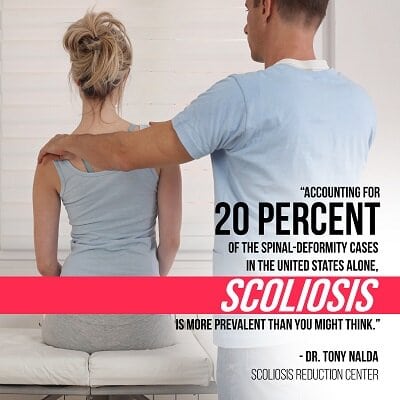 Accounting for 20 percent of the spinal-deformity cases in the United States alone, scoliosis is more prevalent than you might think. In 2018, the National Scoliosis Foundation documented four million known people living with the condition in the States. If studies were to widen their nets and include estimates of how many cases go undiagnosed in second- and third-world countries where poverty is prevalent and access to medical care is limited, that number could be staggering.

As 80 percent of scoliosis cases are defined as idiopathic and the largest subset of that group are adolescents, the best advice I can give parents and caregivers is to take a proactive role in the health of their loved ones and have them screened regularly for scoliosis. The next big piece of advice I would give is if you or a loved one has received a diagnosis, act immediately. There is absolutely no harm in initiating treatment early, but there is a big risk factor associated with the traditional watch-and-wait approach.

My book Scoliosis Hope is a great resource for those wanting to empower themselves with information regarding alternative forms of scoliosis treatment. Every member of my team at the Scoliosis Reduction Center has personal experience with the condition, and we are proud to offer our patients access to multiple forms of alternative treatment through a combination of scoliosis-specific chiropractic care, therapy, exercise, rehabilitation, and corrective bracing.