Does Your Child Need a Scoliosis Brace? Here’s What You Need to Know

Adolescent idiopathic scoliosis affects millions of young people in the United States and all around the world. For many of those with the condition, life is altered in such a way that they are unable to participate in the types of activities that typically characterize adolescence. In most cases, treatment is passive, with doctors taking a “wait-and-see” approach, which, of course, yields no improvement. Eventually, these young people are fitted with braces, such as the Boston Brace. 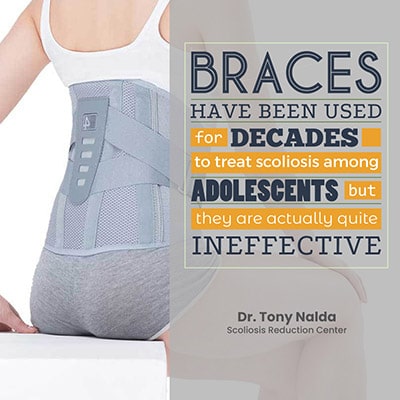 Braces have been used for decades to treat scoliosis among adolescents, but they are actually quite ineffective when it comes to correcting the curvature of the spine. At best, they prevent further irregular curvature. And most of the time, patients who are fitted with braces end up in surgery to correct their condition, which is invasive and life-altering during a critical time in the life of an adolescent.

The Major Types of Scoliosis Braces

The traditional treatment of adolescent idiopathic scoliosis utilizes one of three main types of braces:

This brace, which is the most commonly used scoliosis brace in the United States, is a type of TLSO (Thoracic-Lumbo-Sacral-Orthosis) brace. It focuses on the mid to lower spine, and its purpose is to correct a lateral (sideways) curve. Developed in 1972 by doctors at The Boston Children’s Hospital, this brace is typically constructed of hard, durable plastic, and wraps around the patient’s rib cage, hips and lower back beneath the arms.

The Boston Brace is mass produced, which means that it is not custom made for each patient. However, specialists use a number of methods and measures to ensure the proper fit and function. It is designed to be worn full time, which means that patients are directed to wear it 18 to 23 hours a day for up to five years. In the best-case scenario, patients are advised to transition to part-time usage of the brace as reduction of the curvature progresses. Eventually, patients should be weaned completely out of the brace.

The idea behind this type of scoliosis brace is to compress the irregular curvature of the spine in a manner that induces correction into a straighter position. It uses specially placed pads to apply pressure to the curved areas of the spine. Meanwhile, relief areas of the brace are placed opposite the pads. Essentially, the pads squeeze the spine into position in these areas of relief.

The Boston Brace is meant to be uncomfortable, by design. The idea is that the patient, through this discomfort, will position their spine naturally to give themselves relief. Through this process, the curvature is corrected.

This brace is designed to be worn overnight during sleep. Developed in the late 1970s by doctors in Charleston, South Carolina, the idea behind this brace is to give those with adolescent idiopathic scoliosis the chance to correct single thoracolumbar curves during sleep. The doctors who developed the brace thought it could help patients avoid the stigma associated with wearing a full-time brace. They also wanted to take advantage of the non weight-bearing postures common during sleep, allowing the pelvis to be manipulated and enhancing the correction of some of the curves in the lower area of the spine.

The Charleston Bending Brace is molded in a manner that conforms to the patient’s body while they are bent toward the outward bulge of their curve. It is meant to “overcorrect” the curvature.

Other nocturnal bracing apparatus similar to the Charleston Bending Brace include the Providence Brace, the SpineCor method and the Wilmington Brace.

Also known as a CTLSO (Cervico-Thoraco-Lumbo-Sacral-Orthosis), the Milwaukee Brace is typically prescribed to treat high thoracic — mid-back — curves. Similar to the Boston Brace, this device features a bulkier design that extends all the way from the neck down to the pelvic region. The neck ring and pelvic girdle that comprise the brace are connected by metal bars that extend the torso’s length and keep the head centered above the pelvis. Like the Boston Brace, this device uses strategically placed pads to squeeze the spine into a corrected curvature.

The Milwaukee Brace underwent a number of design improvements since its development by doctors at the Medical College of Wisconsin and Milwaukee Children’s Hospital in the 1940s. The most commonly used design was established in 1975 and has remained virtually unchanged since then.

The Problems with Scoliosis Braces

You might think that because scoliosis braces are the most commonly used devices for treating the condition that they would be highly effective. Unfortunately, that just isn’t the case. 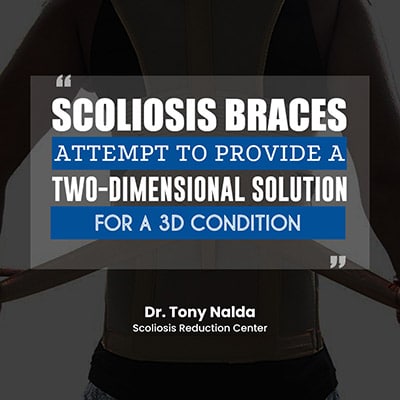 These braces attempt to provide a two-dimensional solution for a 3D condition. While the Boston Brace, for example, can prevent worsening of the curvature, it restricts and weakens the patient’s abdomen, and can actually have an effect opposite of what is intended. Because it is designed to squeeze the spine without crucial strengthening and stabilizing, it can exacerbate the condition and weaken the spine. Additionally, there is a growing belief that the Boston Brace may even increase rigidity of the spine.

Patients who wear traditional scoliosis braces also cite a number of aspects that cause them inconvenience, pain and-or discomfort, including:

Furthermore, it is not uncommon for the devices like the Boston Brace and Milwaukee Brace to be fitted improperly, which leads to a number of serious side effects. Most notably, a brace that is too tight can lead to discomfort with breathing. Bowel obstructions can also occur when a scoliosis brace applies too much pressure against the ribs.

Another major concern with scoliosis braces is that they are not worn according to prescription. Teenagers have enough to worry about without adding to their awkwardness with cumbersome scoliosis braces. Though there is the promise of a physical benefit, many teens weigh their options and conclude that the negative social aspects of wearing a brace are not worth the potential physical relief they may experience.

At the Scoliosis Reduction Center, we take a proactive approach to the treatment of adolescent idiopathic scoliosis. We don’t just wait and see; we get to work on our patients and provide them with the tools and techniques to strengthen their spines, improve function and truly reduce their irregular curvatures. This approach is more natural, more functional and involves a number of treatments that, when combined, provide relief and allow teens to experience their lives as fully as possible.

Do You Have Questions on Scoliosis Braces?

Understanding the effects of scoliosis bracing can be difficult when there is so much information out there. Established treatment options make it seem as if being fitted for devices like the Boston Brace is inevitable, but that isn’t the case. If you’re interested in learning the truth about these types of scoliosis braces, and you are eager to investigate alternatives for your adolescent son or daughter, we are here for you.