Following a scoliosis diagnosis, the most important decision to be made is what treatment approach to commit to. There are two main scoliosis treatment approaches, traditional and conservative, and each favors a different type of brace that’s more aligned with their treatment end goals. Keep reading to learn more about bracing options for kids.

While scoliosis affects all ages, scoliosis in children is the most common. Adolescent idiopathic scoliosis is diagnosed between the ages of 10 and 18, and when it comes to children’s scoliosis brace options, corrective bracing can be an effective form of treatment, particularly in growing bodies.

Scoliosis is often referred to as a complex spinal condition, and this is because not only can it range greatly in severity from mild to moderate and severe to very severe, but also because there are different types that can affect all ages.

While rare, affecting approximately 1 in 10,000, even infants can be born with scoliosis (congenital scoliosis) when a malformation causes the condition within the spine itself.

In cases of congenital scoliosis, as bones of the spine (vertebrae) don’t form properly, it causes the spine to develop an unnatural curve.

In some cases of congenital scoliosis, the condition isn’t detected until adolescence, and that’s because growth and development is the condition’s biggest trigger for progression.

Scoliosis is a progressive condition, meaning it's in its very nature to worsen over time, especially if left untreated or not treated proactively.

The interesting thing about scoliosis in children is that while there are no treatment guarantees, with early detection, there are fewer limits to what we can achieve.

Child scoliosis, however, isn’t always easy to detect, and that’s because in bodies with growing spines, the lengthening motion of growth and development counteracts the compression scoliosis can cause.

As it’s compression of the spine and its surrounding muscles and nerves that are the main cause of condition-related pain, growing bodies tend to not experience the condition as painful: the main difference between adolescents and adults.

While pain is the main symptom of scoliosis in adults, the postural deviation is how most cases of adolescent scoliosis are first noticed by patients, or their families, and as mentioned, adolescent idiopathic scoliosis (AIS) is the condition’s most-prevalent form.

What Is Effective Scoliosis Bracing For Kids?

Adolescent idiopathic scoliosis, diagnosed between the ages of 10 and 18, is the most prevalent type of scoliosis; this age group is in, or entering into, the stage of puberty, which is characterized by rapid and unpredictable growth spurts.

As growth and development is the condition’s main trigger for progression, this age group is at risk for rapid-phase progression, so staying ahead of a young patient’s progressive rate is a key aspect of treatment.

While we know a lot about the condition itself in terms of how it progresses and effective treatment options, the idiopathic designation means we don’t fully understand why it develops initially.

AIS is, instead, considered to be multifactorial, meaning caused by a combination of factors that can vary from person to person.

The key to treating scoliosis effectively is being proactive with treatment, and here at the Scoliosis Reduction Center, I treat patients with a conservative chiropractic-centered treatment approach that strives to preserve the spine’s overall health and function.

So let’s talk about the different treatment goals and how scoliosis brace options reflect those important differences between the two main scoliosis treatment approaches.

Under a traditional scoliosis treatment approach, patients with mild scoliosis are commonly told that their condition should be monitored for progression, known as watching and waiting.

Although monitoring for progression is a big part of my conservative treatment approach, it’s only one facet of proactive treatment. As a progressive condition, I know that, at some point, virtually every case of scoliosis is going to progress, so why waste valuable treatment time while allowing a scoliotic curve to increase in size/severity unimpeded?

The ultimate goal of traditional scoliosis treatment is to stop progression, but that’s not the same as having the conservative treatment’s end goal of correction.

With traditional treatment, the only form of treatment applied prior to a surgical recommendation (once a condition has progressed past that surgical-level threshold), is bracing, usually applied to patients with moderate scoliosis.

The main traditional brace used is the Boston brace, and this brace was designed in the ‘70s; despite what we have learned about the condition itself and how it responds to treatment over the years, its design has changed little over those years.

While some basic measurements go into the Boston brace, it’s mass-produced, cumbersome to wear, and this makes compliance an issue, and in most cases, the brace needs to be worn full time. 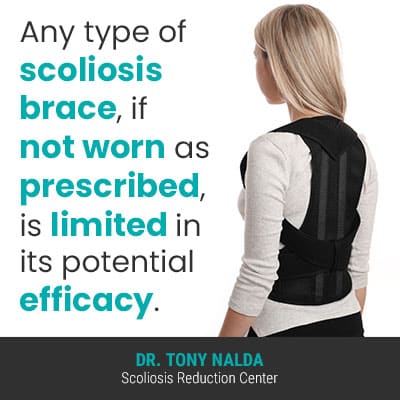 Any type of scoliosis brace, if not worn as prescribed, is limited in its potential efficacy.

An important characteristic of scoliosis is that a scoliotic curve doesn't just bend unnaturally to the side, it twists from back to front, front to back, and this rotational component makes it a 3-dimensional condition.

The Boston brace works by squeezing the spine from the sides, via what’s known as a three-point pressure system, so that movement of the spine (further progression) is limited, but this is one of the main shortfalls of traditional treatment: it only addresses the condition as 2-dimensional, so its efficacy is limited.

In addition, applying that type of squeezing pressure can, over time, weaken an already vulnerable spine, and the Boston brace is also associated with increasing related postural deviation.

While the Boston brace can still have a place in scoliosis treatment, there is another modern scoliosis brace option that offers corrective results, while preserving optimal spinal health and function.

As mentioned, here at the Center, a conservative treatment approach is what’s used, and as my ultimate treatment goal is a correction on a structural level, I don’t want to just prevent progression, I want to preserve as much of the spine’s natural function as possible, throughout treatment and beyond.

Here at the Center, when my adolescent patients can benefit from bracing as a treatment option, I favor the use of the ScoliBrace: a modern and dynamic ultra corrective scoliosis brace that has correction as its end goal. 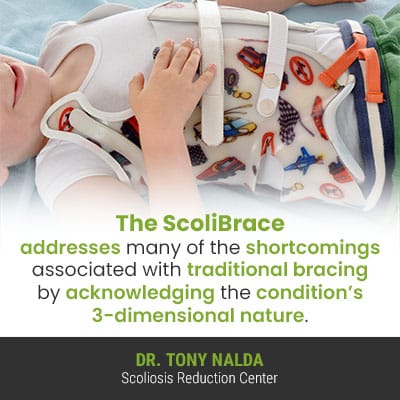 The ScoliBrace addresses many of the shortcomings associated with traditional bracing because it acknowledges the condition’s 3-dimensional nature.

The ScoliBrace also uses state-of-the-art technology to gain extensive measurements so that each brace is fully customized to address an individual's body and condition type; this impacts the issue of compliance.

As the ScoliBrace is bespoke to each individual wearer, it’s more comfortable, less difficult to conceal under clothes, can be further customized by color/pattern, and can easily be opened at the front.

In addition, the ScoliBrace isn’t associated with increasing postural deviation, as the traditional Boston brace is.

As the end goal of the ScoliBrace is correction, and not solely stopping progression, its design reflects this by not squeezing the spine unnaturally, and instead pushing it into a corrective position. When combined with other forms of treatment offered with a conservative treatment approach, the ScoliBrace can be a valuable form of treatment with corrective potential.

When it comes to scoliosis brace options for kids, it’s important for these young patients and their families to understand that these different treatment options offer different potential results.

While a traditional Boston brace is associated with several shortcomings, including only addressing the condition as 2-dimensional and unnaturally squeezing the spine from the sides, there is another modern bracing option for kids: the ScoliBrace.

Here at the Scoliosis Reduction Center, I favor the use of the ScoliBrace for my adolescent patients because it’s more aligned with my ultimate treatment goals: impacting progression through correction on a structural level.

While no scoliosis brace alone can impact the condition on every level, when integrated into a proactive, customized treatment plan and combined with other forms of treatment, such as chiropractic care and physical therapy, the modern ScoliBrace can help preserve as much of the spine’s natural function as possible, while augmenting corrective results.