Just as the two main scoliosis treatment approaches offer different potential results, a different type of brace is favored by each. While the Boston brace is the most widely-used traditional scoliosis brace, there is a modern and dynamic brace alternative that represents the culmination of what we’ve learned about scoliosis bracing over the years: the ultra-corrective ScoliBrace.

As the efficacy of the Boston brace is limited when it comes to stopping scoliosis progression in growing bodies, a Boston brace alternative is the ScoliBrace. It’s customized to suit each patient’s body/curvature type, can manage progression, and offers corrective results.

Before getting into the specific shortfalls associated with the Boston brace, let’s first discuss the two main scoliosis treatment approaches, and why each favors a different type of brace.

The two main scoliosis treatment approaches are traditional and conservative; the former favors the use of the Boston brace, while the latter values the corrective potential of the modern ScoliBrace.

Scoliosis is a progressive spinal condition, meaning it’s in its very nature to worsen over time, particularly if left untreated, or not treated proactively.

Once a scoliosis diagnosis is given, the most important decision is how to treat it moving forward, as treatment outcome can have far-reaching effects.

Scoliosis can range from mild to moderate and severe to very severe, and where a patient’s condition is at the time of diagnosis is not indicative of where it will stay.

The goal of the traditional scoliosis treatment approach is to stop the condition from progressing in severity, and while managing progression is also part of the conservative treatment approach, its main focus is the correction.

Here at the Scoliosis Reduction Center, patients are treated under a conservative chiropractic-centered treatment approach that strives to preserve as much of the spine’s natural function as possible, which is why it’s also commonly referred to as a functional approach.

As a structural spinal condition, first and foremost, scoliosis has to be impacted on a structural level, in the form of a curvature reduction (corrective results), while the traditional approach is known to funnel patients towards spinal fusion as a means of stopping progression.

The most widely-used traditional scoliosis brace is the Boston brace.

What is the Boston Brace?

The Boston brace is a type of scoliosis brace and is the most commonly-prescribed traditional brace in the United States.

The Boston focuses on scoliotic curves in the mid to lower spine (thoracic, lumbar, and thoracolumbar) and has the end goal of stopping the curve from increasing in size and severity.

Designed in the 1970s, the Boston is constructed from a hard and durable plastic that wraps under the arms and extends down the rib cage, hips, and lower back. 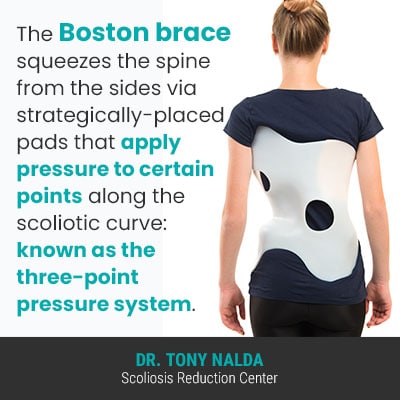 The Boston brace squeezes the spine from the sides via strategically-placed pads that apply pressure to certain points along the scoliotic curve: known as the three-point pressure system.

The idea behind the Boston is that by squeezing the spine into a straighter alignment, the curve won’t progress as movement in the area is limited.

Most often, the Boston is prescribed for full-time wear, meaning approximately 18 to 23 hours a day, for up to five years.

As the design of the Boston brace has changed little over the years, despite our growing understanding of the condition and how it responds to treatment, including bracing, it’s associated with a number of limitations.

Limitations of the Boston Brace

The Boston brace is limited in its efficacy for a number of reasons.

In order for an unnatural spinal curve to be diagnosed as scoliosis, in addition to it bending unnaturally to the side, it also has to have a rotational component, meaning it twists from back to front, front to back, making it a 3-dimensional condition.

As the Boston works by squeezing the spine from the sides, it’s only addressing the condition as 2-dimensional, limiting its efficacy by not impacting the condition’s rotational component.

In addition, squeezing an already-weakened spine from the sides can weaken it further over time, leading to additional problems such as increased postural deviation.

While fitting a Boston brace does involve a series of measurements, it is still mass-produced so is never fully bespoke to its wearer, meaning a brace that’s bulky and less comfortable to wear, leading to one of the main challenges of scoliosis bracing for young patients: compliance.

Remember, the most prevalent type of scoliosis is adolescent idiopathic scoliosis (AIS), diagnosed between the ages of 10 and 18, and many adolescents/teens don’t want to be set apart from their peers, they want to fit in, and wearing a brace that’s uncomfortable and difficult to conceal is less likely to be worn as prescribed, limiting its efficacy further.

Fortunately, there is a scoliosis brace alternative that’s known to address many of the shortfalls associated with the traditional Boston brace: the ScoliBrace.

The modern ultra-corrective ScoliBrace provides an alternative to the traditional Boston brace through its dynamic design and end goal. 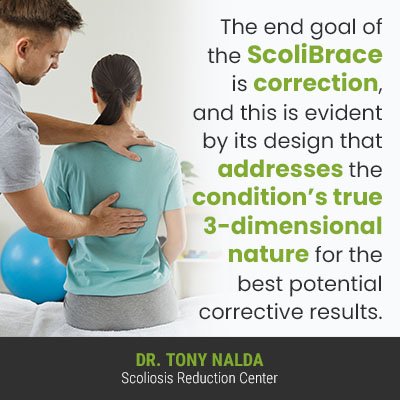 The end goal of the ScoliBrace is correction, and this is evident by its design that addresses the condition’s true 3-dimensional nature for the best potential corrective results.

The ScoliBrace represents a new era for scoliosis bracing by addressing the shortfalls associated with traditional bracing, and when it comes to the Center’s adolescent/teen patients, this means better compliance, less activity restrictions, and preserving more of the spine’s natural function.

By pushing the spine, rather than squeezing it, the spine’s strength is preserved and postural deviation is reduced, rather than increased as tends to happen with the Boston brace.

In addition, the ScoliBrace involves state-of-the-art scanning technology (BraceScan, CAD, CAM, postural photos, and X-ray images) so each and every brace is fully-customized to address body/curvature type, making it less bulky, easier to conceal, and more comfortable to wear: resulting in better compliance.

The ScoliBrace also opens and closes easily at the front and can be further customized by patients in terms of color/pattern.

As the ScoliBrace works towards reducing the scoliotic curve on a structural level for ultra-corrective results, it’s addressing the underlying cause of condition-related postural asymmetries such as uneven shoulders, the characteristic scoliosis rib arch, and an uneven waistline.

Here at the Scoliosis Reduction Center, I treat patients with a conservative chiropractic-centered scoliosis treatment approach for the best potential results.

In addition to valuing proactive treatment applied as close to the time of diagnosis as possible, I believe in integrating multiple treatment disciplines so conditions are impacted on every level: addressing the true 3-dimensional nature of a scoliotic curve.

While the traditional scoliosis treatment approach has been in place for many years, it’s changed little over those years, despite our evolving understanding of the condition, and how it responds to different forms of treatment, such as scoliosis bracing.

The most prevalent traditional scoliosis brace used in the United States is the Boston brace, and just like the traditional approach itself, the design of the Boston has changed little since its inception in the ‘70s.

In addition, the Boston brace doesn’t address the condition’s 3-dimensional nature, instead only treating it in two dimensions: squeezing the spine from the sides, using a three-point pressure system, and limiting its efficacy.

The Boston brace is also associated with increased postural deviation and, over time, weakening an already-vulnerable scoliotic spine.

Under a conservative treatment approach, the ultra-corrective ScoliBrace addresses many of the limitations associated with traditional bracing by addressing the condition’s true 3-dimensional nature.

While there are no treatment guarantees, the ScoliBrace works by pushing the spine into a corrective position that counteracts the unnatural scoliotic curve without weakening the spine, while reducing related postural deviation alongside a curvature reduction.

While no brace has the power to achieve fully-corrective treatment results on its own, when integrated into a proactive treatment plan that addresses multiple condition-specific treatment disciplines such as chiropractic care and physical therapy, conditions can be impacted on a structural level, and the spine’s overall health and function can be preserved throughout treatment and beyond.

Get Your Copy of Dr. Tony's BookContact Us & Request More Info

About Us
Our Treatment ResultsContact Us
Copyright © 2021 - Scoliosis Reduction Center. All Rights Reserved.
Designed By:
Ignite Marketing