Naturally, when someone receives a diagnosis of a medical condition, they are eager to understand what caused it. This is especially true of those who have been diagnosed with scoliosis, or who have a child with scoliosis. The fact of the matter is that scoliosis causes vary widely, and in most cases, it is simply not possible to determine a specific cause.

If you are wondering about the reasons why you or your child has developed scoliosis, I can understand why you are interested to learn about what may have caused the condition. The truth about scoliosis causes can be difficult to find, and the internet is full of misinformation on the subject.

To help you better understand scoliosis and its causes, here are some facts that can help you make sense of the condition and how it arises: 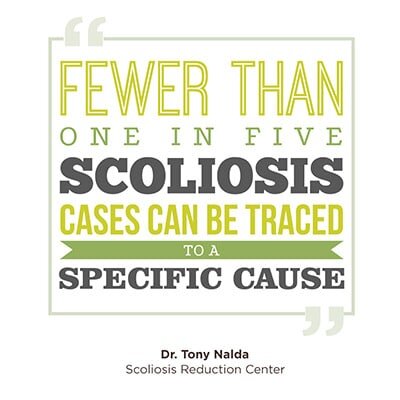 This fact can be frustrating to reckon with, but it’s the truth. Fewer than one in five scoliosis cases can be traced to a specific cause, which leaves most people with the condition wondering how it developed. So, what are the direct causes that can be identified? They include:

#2 — Most Cases of Scoliosis Are Idiopathic

The vast majority — 80% — of scoliosis cases are described as idiopathic, which means they have no known cause. Basically, it’s impossible to determine a single causative source of the condition in more than four out of five patients.

It should be noted that idiopathic doesn’t mean there’s an absence of a cause; it means that the cause is not apparent or easily determined.

Because the cause or causes of idiopathic scoliosis remain mysterious, many patients wonder if the condition is related to genetics. Did it come from a parent? Is there a gene responsible for the condition? This leads to our next fact...

It’s easy to understand why a genetic explanation for scoliosis would be so satisfying. It would eliminate the mystery and the guesswork about how the condition arose, and relieve patients of any nagging feelings that they did something wrong to develop scoliosis.

The truth is that attributing a genetic basis to scoliosis is futile. While it’s possible that there may be a genetic predisposition for scoliosis, there is no way to know if a gene will be expressed in the carrier. In other words, someone could be carrying the “scoliosis gene,” but it may never result in an actual case of scoliosis. Moreover, someone who is not a carrier of the gene could develop scoliosis through some other combination of causative factors.

#4 — Scoliosis Almost Always Develops from a Combination of Causes

Although we cannot trace a person’s scoliosis back to a singular cause in the majority of cases, it’s clear that most idiopathic scoliosis arises due to a combination of factors, both genetic and environmental. Scoliosis is not a simple condition; it is quite complex, and it affects different people in different ways. This is why each individual must be evaluated independently to determine the factors that are likely contributing to the development and progression of the condition.

#5 — If a Singular Cause Were Found, The Nature of Treatment Would Not Change 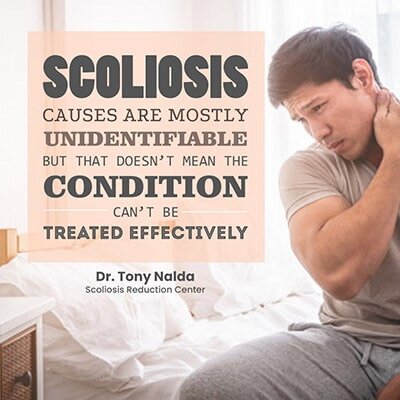 Scoliosis causes are mostly unidentifiable, but that doesn’t mean the condition can’t be treated effectively. In fact, the approach we take here at the Scoliosis Reduction Center has helped us transform the lives of our patients by reducing curvatures, adding strength and improving function.

We utilize a combination of treatments, including scoliosis-specific chiropractic care, therapy, exercise and corrective bracing. The cause, if it can be determined, rarely plays in to how we approach the successful treatment of our patients.

More Information on Scoliosis Causes and Insights Into Effective Treatments

I can understand if you’re frustrated by the lack of clarity that’s available regarding the possible causes of scoliosis. But you should not let that frustration prevent you from seeking relief from the condition, whether you have scoliosis or you are the parent of a child with scoliosis. When you look at the facts about scoliosis causes, you can take comfort knowing that most people are in the same boat — there is no known singular cause! However, we do know what works when it comes to treating scoliosis and preventing further progression.

If you are interested in learning more about the causes of scoliosis and why our treatments are so effective, I invite you to give us a call at the Scoliosis Reduction Center to learn more. Our patients are proof of our success, and our team is made up of individuals who live with scoliosis themselves. We would love to hear from you, so please contact us today at 321-939-2328.