Yoga for Scoliosis — Can it Really Make a Difference?

Yoga is an ancient practice with roots that go back more than 5,000 years to India. But its popularity has exploded in the last decade or two, especially in Western countries like the United States. People who practice yoga experience a number of benefits, many of which are now backed by science. It can relieve stress and anxiety, reduce inflammation, improve flexibility and balance, increase strength and much more.

What about yoga for scoliosis, though? Is it an effective treatment?

The traditional orthopedic method of treatment — consisting of observation, bracing and surgery — is well established, but it is far from the only approach available. These days, patients and parents are becoming increasingly aware of alternative treatments, many of which are capable of creating significant improvements. Yoga for scoliosis is just one alternative element of treatment that people consider, and it seems promising considering the benefits it provides to those who practice. But is it truly helpful for people who have abnormally curved spines?

The Potential Benefits of Yoga for Scoliosis

Yoga is a terrific form of exercise for certain types of muscles, particularly type-one, “slow-twitch” muscles. Most yoga poses involve long, isometric contractions that involve holding a specific position or pose for a long period of time. For most people, this is highly beneficial to spinal strength. Furthermore, the muscles that are typically strengthened by yoga are those that affect posture. So in this sense, yoga can be effective.

I honestly believe that yoga can help people with pain, posture and the ways in which they carry themselves. It’s an absolutely effective mode of exercise in that regard. But it is important for people to understand that yoga, in and of itself, is not an effective sole treatment for scoliosis.

Certainly, if a patient works with a yoga instructor who understands scoliosis — and understands each specific case of the condition — it can be effective. Unfortunately, most yoga instructors and practitioners do not make special considerations for people who have abnormal spinal curvatures.

An Issue of Symmetry

In most cases, yoga is practiced in a symmetrical manner. Basically, it is performed in a way that assumes one side of the body is a perfect mirror image of the other. But we know that for people with scoliosis, this is not the case. Therefore, when it comes to reducing curvatures, yoga is simply not effective. It does not do anything specific to help reduce a scoliosis curve. 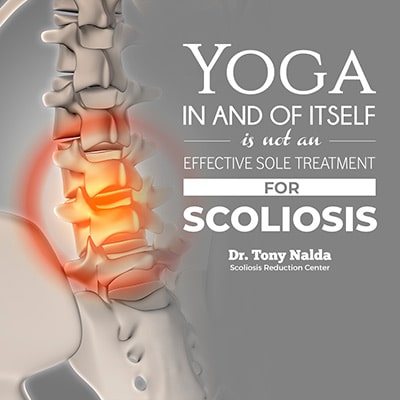 By the time a person is able to perform yoga well, severe asymmetrical motion has occurred in the spine. Essentially, the spine isn’t moving the same in both directions, which can exacerbate the issues associated with the condition.

Imagine that you want to work and strengthen both of your bicep muscles in your upper arms. However, one elbow is only capable of a very limited range of motion, while the other is capable of normal motion. In this scenario, only the bicep on the arm with a normal range of motion will get an effective workout, even with the identical set of exercises. Yoga for scoliosis has a similar effect on the muscles surrounding the spine: on one side a patient may be capable of normal motion, but on the other, they may be severely restricted, which will have negative impact.

Once a person has received a scoliosis diagnosis, yoga is minimally effective, and this is because of the asymmetrical joint motion. At this point, the condition has become structural, and there’s very little — if anything — that the practice of yoga can do to restore motion, improve function and reduce curvatures.

Additionally, depending upon curve type and severity, yoga can actually make the condition worse.

I don’t mean to give yoga a bad name! I honestly believe that it can be incredibly helpful for building strength, flexibility and range of motion. It is just not effective as a treatment for scoliosis.

Scoliosis-specific exercise, on the other hand, is a form of alternative treatment that can help patients experience a number of benefits — particularly when combined with scoliosis-specific chiropractic, therapy and specialized bracing.

Scoliosis-specific exercises are customized for each individual curve type, as well as each patient’s ability to perform the exercises.

I have a five-year old patient right now who has a curve that’s technically appropriate for a variety of exercises. But I have to take into account that she is only five years old, which means that I have to prescribe exercises that can be easily guided by her parents in order to have the desired effect. If I had a 12-year old patient with the same curve, the exercises would be different.

Age is just one factor of many that should be considered when devising a scoliosis-specific exercise regimen.

The only way to know for sure if an exercise or fitness program is appropriate is to have the spine assessed by an expert who can take curve type, curve size, abilities and a host of other factors into account.

Yoga for Scoliosis, Can It Really Make A Difference?

The Truth about Yoga for Scoliosis

Yoga is one of the most beneficial forms of exercise available, and its 5,000-year track record speaks for itself. It provides a wide range of science-backed benefits to those who practice, and it can be incredibly useful in the quest for greater physical and mental fitness. That being said, it is not an effective alternative treatment for scoliosis.

In most cases, scoliosis patients can experience benefits from exercise, stretching and other types of physical activity. Depending on the person and their specific curve, there may even be some yoga poses that relieve pain and improve flexibility. But I cannot recommend yoga as a treatment, especially if it is not practiced under the guidance of someone who fully understands the condition.