Why Is Scoliosis More Common In Females Than In Males?

Not only is adolescent idiopathic scoliosis more commonly diagnosed in females than in males, abnormal spinal curvatures are also more likely to progress in females. While there is no one solid theory proven to account for these differences, there are many that attempt to explain the connection.

You might be wondering why there is all this talk about ‘theories’ when it comes to scoliosis; this is because scoliosis, despite having been around for hundreds of years, remains a very mysterious condition. Before we move on to exploring why scoliosis is more common in females than in males, let’s take a look at some of the condition’s other mystifying characteristics.

When I think about the mysteries of the human body, there is a famous quote from Isacc Newton that comes to mind: “What we know is a drop. What we don’t know is an ocean.”

When it comes to health and wellness, we can never know or understand too little, and we can continue researching until those gaps are closed.

While there is certainly more we know and understand about scoliosis than what we don’t, that quote reminds me how much we still have to learn; this is particularly the case with the question of why the condition’s most common form (AIS) develops in the first place.

Part of the reason scoliosis is so often described as a complex condition is that it can take on many forms.

Scoliosis can develop at any age and develop anywhere along the spine. That being said, scoliosis is far more commonly diagnosed in adolescents between the ages of 10 and 18: adolescent idiopathic scoliosis (AIS).

Diagnoses of AIS accounts for 80 percent of known diagnosed cases, and the ‘idiopathic’ designation means there is no single known cause that accounts for its development in this age group; instead, the condition is considered to be ‘multifactorial’.

Multifactorial means the condition’s most common form is thought to develop due to a number of variables, variables that can differ from person to person.

So in the condition’s most common form (AIS), despite years of research and exploration on the topic of scoliosis and causation, we have yet to isolate a single known cause.

There are also other mysterious aspects of the condition that have generated a lot of debate over the years, and one is whether or not the condition can be classified as ‘genetic’.

Is Scoliosis Genetic, or Familial?

It’s natural for people to want to know what has caused their scoliosis, and for parents and caregivers of adolescents recently diagnosed, one of the first questions is if scoliosis is genetic and was something they passed down to their child.

Especially in conditions with no known single cause, such as AIS, it’s easy to assume there is a genetic component; however, despite the efforts made to isolate a single gene or genetic mutation responsible for the development of scoliosis in adolescents, this has yet to happen.

What makes the topic confusing is that there is an increase in scoliosis incidence in families with a history of scoliosis, but that connection is generally accepted as ‘familial’, rather than ‘genetic’.

The designation as ‘familial’ acknowledges the condition’s prevalence in families, but does so without a genetic component.

How I explain this difference is that families share a lot more than just their genes. As discussed earlier, AIS is regarded as multifactorial, and shared familial traits such as diet and lifestyle, environment, socio-economic factors, responses to stress, and posture are possible attributes for the familial link.

So while having someone in the family with scoliosis might increase the likelihood of another person in that same family also developing the condition, the connection is commonly regarded as familial, more so than genetic.

Before we move on to the main topic of scoliosis in females versus males, let’s first touch on another of the condition’s complex factors.

One of the defining features of scoliosis is its progressive nature; this means that its very nature is to get worse over time and there is no known cure.

What we focus on, therefore, is treating and managing the condition’s progression as effectively as possible.

While there is no easy formula that can be applied to a scoliosis patient that determines just how fast, or slow, their condition is going to progress, we do know that growth and development is the main trigger for progression.

Here at the Scoliosis Reduction Center, once I comprehensively examine, observe, and read a patient’s scoliosis X-ray, I have the information I need to design a customized treatment approach. While there are certain tests that can be done to gauge just how much growth a patient has yet to go through, the way each patient’s spine responds to that growth is unique, making progression another mysterious aspect of the condition.

We also know that there are big differences in growth, development, and hormones between female and male adolescents. 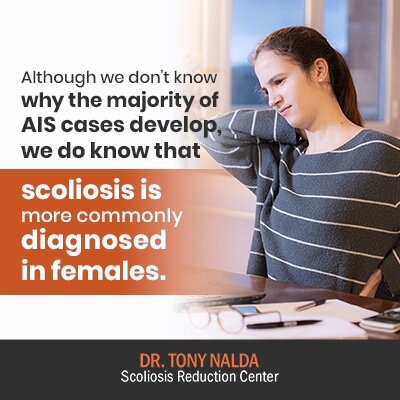 Although we don’t know why the majority of AIS cases develop, we do know that scoliosis is more commonly diagnosed in females.

So why are more girls getting scoliosis than boys? And why are their curvatures so much more likely to get worse?

As is the case in many areas of scoliosis understanding, there is no shortage of theories to answer these questions, but they are just that: theories.

Following is one of the more common and generally-accepted theories addressing the difference between scoliosis development in adolescent females and males.

There are some theories that connect the development of idiopathic scoliosis in adolescents, particularly in females, to the functioning of the body’s autonomic nervous system (ANS). The ANS helps to direct puberty and skeletal growth through hypothalamic neuroendocrine control, meaning hormone levels.

Leptin is a master hormone that performs many regulatory functions related to growth and reproduction, one of which is to suppress appetite by telling a person when they are full and it’s time to stop eating.

In the context of scoliosis, leptin is thought to play a significant role in bone growth, body weight, the initiation of puberty, and dysfunction of the sympathetic nervous system (part of the ANS). 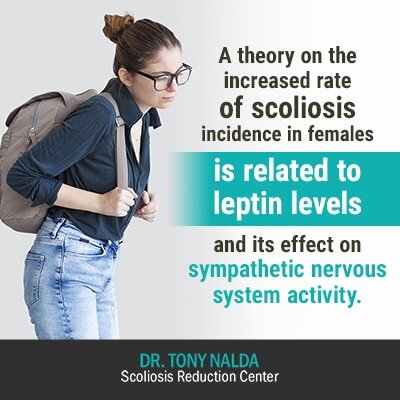 A theory on the increased rate of scoliosis incidence in females is related to leptin levels and its effect on sympathetic nervous system activity.

The theory on why scoliosis is more common in females than males related to leptin levels suggests that in AIS-susceptible girls, there is an altered sensitivity to the hormone, leading to an increase in SNS activity.

This increase in SNS activity is thought to contribute to AIS development in the following ways:

In general, it’s thought that the overall functioning of the SNS can drive changes to the spine, such as asymmetries, that complicate the neuroendocrine effects on spinal growth in adolescents.

The role of other hormones, such as melatonin, in the etiology and pathogenesis of scoliosis, has also been explored, but this theory has been found to have little scientific-based support.

We know that, for girls, puberty tends to start earlier, and as we know that growth and development are the big triggers for scoliosis progression, this early initiation into puberty and its rapid and unpredictable growth spurts could be partially related to why scoliosis develops more commonly in females.

This is also a potential explanation to why idiopathic scoliosis tends to progress faster in girls, than in boys. Whether this is due to hormone levels, or which hormones, and their effect on the body’s nervous systems has yet to be proven.

For now, we have to be content with what we have learned about the condition, focus our efforts on treating it effectively, and building up a foundation for future exploration of the condition in all its complexities.

While there has been no lack of effort made by the medical community, we still haven't found a definitive single cause for the development of adolescent idiopathic scoliosis.

This is particularly frustrating because as the condition’s most common form, having a better understanding of its causation could get us closer to understanding potential preventative measures.

While there is still a lot we don’t know about the condition, we do know that scoliosis is far more commonly diagnosed in female adolescents and adults than in males. We also know that a female with an abnormal spinal curvature is more likely to progress substantially than a male.

While there have been numerous theories proposed to explain the higher incidence of idiopathic scoliosis in females, I feel the following is most likely: whether due to hormone levels, or other possible gender differences, females simply start puberty earlier and develop faster.

As we know that growth and development affect scoliosis progression more than other factors, we also know that girls have more rapid and hormone-driven growth spurts than boys do; these differences have the potential to make females more highly susceptible to developing idiopathic scoliosis than males.