People with scoliosis live with an abnormal sideways curvature to their spine. Depending on the severity of that curvature, their condition is placed on a range from mild to severe. Mild scoliosis refers to cases where the curvature measures over 10 degrees and less than 25.

How a Curvature is Measured

Scoliosis is progressive. What starts out as mild can end up as severe, especially if left untreated. While there have been cases where curvatures remain the same for long periods of time or are slow to progress, no one is simply going to outgrow an abnormal spinal curvature.

One of the first steps to deciding on a treatment plan is to have the condition placed on the severity scale. Most often, a series of tests will be performed, such as bends, observations of gait and posture, and the most widely used measurement for scoliosis curvatures, the Cobb angle, will be taken. 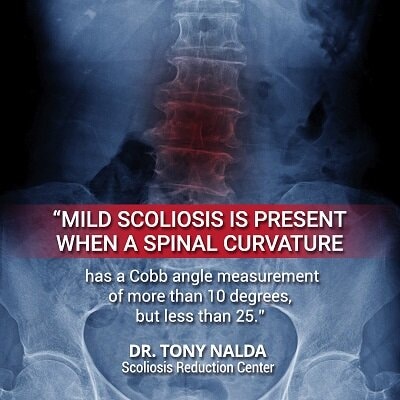 Mild scoliosis is present when a spinal curvature has a Cobb angle measurement of more than 10 degrees, but less than 25.

Moderate scoliosis is categorized by a Cobb angle measurement between 25 and 40 degrees.

Based on the severity of a patient’s scoliosis, symptoms and forms of treatment will vary.

If you or a loved one has recently received a mild scoliosis diagnosis, you might not be feeling particularly fortunate, but catching it early can have a huge impact in terms of treatment efficacy.

Catching scoliosis early is not an easy thing; this is because, especially in cases of adolescent scoliosis, it is often a painless condition without a lot of noticeable symptoms. While a scoliosis expert might be able to notice some of the subtle bodily changes that accompany mild scoliosis, that doesn’t represent the majority of patients and their caregivers.

Adolescents with mild scoliosis don’t experience pain in the same way as adults do, and the majority of scoliosis cases are adolescent with the most common age of diagnosis falling between 10 and 18.

As adolescence is characterized by constant change and growth, the spine experiences an upward growth during this stage. This upward growth means a lack of compression, which accounts for the absence of pain in the majority of mild adolescent scoliosis cases.

While it’s less common, some adolescents with mild scoliosis do experience pain in the form of headaches, muscle pain, or pain in the back, neck, hip, or shoulder.

Individuals who have been living with scoliosis from a young age report that their pain levels increase as they age. This is understood in terms of growth and compression.

As adults have stopped growing, that means there is no upward growth of the spine. When that lengthening motion of the spine stops, the compression factor comes into play. Once lengthening turns into compression, constant pressure is being placed on the spine and its surrounding nerves and tissues, leading to pain and discomfort. This is why adults with mild scoliosis are so much more likely to experience muscle pain, headaches, and pain in the back, neck, hip, or shoulder.

As scoliosis progresses and a curvature becomes more severe, the risk of pain increases dramatically. This is why it’s so crucial to start treatment early on when the condition is still in the mild phase.

How to be Proactive with Scoliosis

As a society, we’re not strangers to the benefits of being proactive with our health. There is advice everywhere on the merits of prevention versus cure and the importance of having a healthy relationship with our bodies through diet, exercise, and practices that support mental health.

This represents one of the biggest challenges associated with scoliosis as a staggering 80 percent of known cases are idiopathic, meaning there is no known cause. A person can be as healthy and active as they want, but that may or may not protect them against developing the condition.

Because the nature of scoliosis is to progress, it’s extra important to be watchful for symptoms of the condition so an early diagnosis can be reached. While positive lifestyle choices alone can’t stave off the condition, being mindful of the symptoms to watch for can mean catching it early when the chances of successful treatment are at their highest.

In my experience, treatment initiated as close to the time of diagnosis as possible has a much higher chance of slowing or halting the condition’s progression than waiting until the condition moves into the moderate and severe stages. 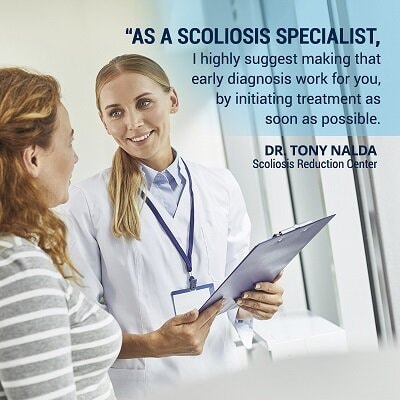 As a scoliosis specialist, I highly suggest making that early diagnosis work for you by initiating treatment as soon as possible.

Screening is also an effective way to be proactive with scoliosis. If you have any concerns that you or a loved one has mild scoliosis, don’t hesitate to go to a specialist for early screening.

Staying on top of regular assessments only means increasing the chances of catching the condition early. I do suggest getting screened by a scoliosis specialist, rather than a regular doctor; this is because the nature of mild scoliosis makes it difficult to diagnose, and a specialist knows exactly what to look for in terms of a physical exam and an X-ray.

Symptoms of Mild Scoliosis to Watch For

As in any condition, every case is different. When it comes to scoliosis, symptoms depend on a number of factors. There are, however, some fairly common symptoms that can help you know exactly what to look for and be mindful of:

Especially during adolescence, these symptoms can be hard to spot. Adolescents and teenagers are constantly growing and changing, and that just makes it harder to see something as out of the ordinary.

As I mentioned earlier, I’m a big believer in being proactive and starting treatment for scoliosis as soon as possible. In fact, the inspiration behind opening up the Scoliosis Reduction Center was to promote awareness of alternative treatment options and provide people with access to multiple forms of treatment that don’t end with spinal-fusion surgery.

Our scoliosis-specific chiropractic approach is all about being proactive. It’s about getting that diagnosis and immediately working with our patients and their caregivers to come up with a treatment plan that is customized to the individual and offers them the best chance of slowing down or halting the condition’s progression. Once we address the structural aspect of the curvature, we widen our treatment plan to include aspects of diet, exercise, and mental health.

My chiropractic-centered approach is highly effective with all levels of scoliosis, but especially during the mild stage. At this stage, the curvature’s Cobb angle measures less than 25 degrees. This is the time to initiate chiropractic care, exercise and rehabilitation that work together to strengthen the spine in a corrective position and increase functionality. This is also the time to cultivate a positive strategy for managing life with the condition and implementing any lifestyle changes that should be made.

The conventional wisdom that informs the traditional treatment approach for scoliosis is in contrast with what we do here at the Scoliosis Reduction Center. A traditional treatment approach for a case of mild scoliosis would recommend observation. Advice would include watching and waiting to see if the curvature progresses and at what rate. Commonly, this is done by taking X-rays every three-to-six months.

One of the main issues I have with this approach is that time is valuable, especially when you’re talking about a progressive condition like scoliosis. While doctors and patients are watching and waiting, the time that passes between X-rays and examinations can quite simply be too long, especially in light of how quickly growth spurts hit children and adolescents.

As the number one risk factor for progression is growth, recommending that an adolescent patient and their caregivers simply watch and wait while that patient goes through all the growth that characterizes the puberty stage seems counterintuitive to me. The watching and waiting while the curvature progresses unimpeded just increases the likelihood of needing spinal-fusion surgery down the road.

Even if a brace is recommended, conventional bracing is more about ‘holding’ the spine, rather than ‘correcting’ it, not to mention how long it can take to wait for an ordered brace to arrive.

When it comes to traditional treatment, my belief is that it funnels patients toward spinal-fusion surgery that, in most cases, can and should be avoided.

In cases of mild scoliosis, these people are at an advantage; they are at an advantage because their condition was caught early on. As we’ve discussed, early diagnosis is challenging with scoliosis, but it is also extremely important. Once there is the awareness that a spinal curvature is present, active treatment and working towards a reduction can begin.

While traditional approaches to mild scoliosis include a lot of watching and waiting, that can mean allowing a curvature to progress unimpeded, which can have severe consequences. The most common age for diagnosing scoliosis is between 10 and 18, and the growth that occurs at that age makes that time the most crucial for starting treatment.

If you or a loved one are facing a recent mild-scoliosis diagnosis, this is the time you’ll seek advice, do your research, and decide on a treatment approach.

Every member of my team, here at the Scoliosis Reduction Center, has personal experience with the condition, and we are proud to provide our patients and their families with multiple forms of treatment in one convenient and accessible location.