Signs of Scoliosis: How To Tell If You Have Scoliosis

With scoliosis, early detection is particularly beneficial; this is because as a progressive condition, scoliosis is virtually guaranteed to get worse over time, if left untreated. The earlier scoliosis is spotted and diagnosed, the sooner treatment can be started.

Here are some of the signs of scoliosis to watch for:

The Spine and Scoliosis

When a person develops scoliosis, this means they have a progressive spinal condition marked by an abnormal sideways curvature that includes rotation.

When the spine develops an abnormal curvature, this means there is a loss of the spine’s natural and healthy curves, and this doesn’t just impact the spine at the site of curvature, but throughout as the spine’s overall biomechanics are disrupted.

Along with rotation, the curvature also has to have a Cobb angle of more than 10 degrees to be diagnosed as scoliosis; this is a measurement obtained via X-ray that classifies how far out of alignment a patient’s spine is.

The higher the Cobb angle, the more severe the condition is. Before moving on to the signs of scoliosis, it’s important to first understand the condition’s different severity levels:

Condition severity is an important piece of information because it informs the treatment approach moving forward and indicates potential symptoms, as well as giving us an idea of a patient’s ‘likely’ rate of progression.

I say ‘likely’ because while there are certain patient and condition characteristics that can help us predict a patient’s progressive rate, there is no definitive means by which we can 100-percent gauge how fast, or slow, a patient’s condition will progress.

As such an important aspect of scoliosis, let’s discuss progression in more detail.

What Are the Signs of Scoliosis and Recommendations After Diagnosis

Reaching a diagnosis and getting answers to questions about what is happening in your body is always a good thing, but when it comes to progressive conditions like scoliosis, early detection is especially important in terms of potential treatment success.

When it comes to the condition’s most common form, adolescent idiopathic scoliosis (AIS), diagnosed between the ages of 10 and 18, we know this age group is at a particularly high risk of progression because they have not yet reached skeletal maturity; AIS accounts for 80 percent of known diagnosed cases.

We might not know what causes the onset of AIS, but we do know it’s number-one trigger for progression: growth and development.

Conversely, in adult scoliosis, we know they are not at such a high risk of rapid progression because they have already reached skeletal maturity and no longer have that big progression-trigger.

Instead, scoliosis progression in adults tends to be slower and has more of a cumulative effect. Even at a relatively slow progressive rate of a degree a year, over 10 years, that can add up to a significant degree of curvature.

This is why I place such a strong emphasis on early detection. The goal is to diagnose a condition while it is still in its mildest stage, before it progresses into the moderate and severe stages. 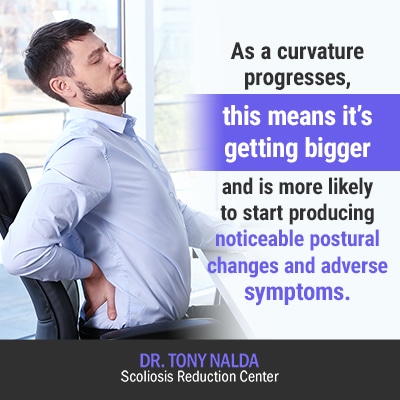 As a curvature progresses, this means it’s getting bigger and is more likely to start producing noticeable postural changes and adverse symptoms.

Knowing how to tell if you have scoliosis means understanding the indicators for the condition, so let’s move on to discussing the signs of scoliosis in more depth and detail.

Understanding the Signs of Scoliosis

The best time to treat scoliosis is when the condition is mild, but in order for that to happen, people have to be educated on the signs of scoliosis that they should be looking for.

Depending on condition severity, signs can range from subtle to overt, with many only noticeable to experts who are aware of exactly what to look for.

As scoliosis isn’t a static condition, the goal is to reach a diagnosis as early as possible before it becomes more severe. Not only do we want to spare patients the hardships associated with the higher stages of progression, we also know that smaller curvatures are easier to treat.

Smaller curvatures are easier to treat because, generally, spines lose flexibility as a curvature progresses, the body has not had as much time to adjust to the curvature, and put simply, they are less complex than larger curvatures.

Let’s break down the earlier list of signs of scoliosis.

The postural changes that accompany scoliosis will range significantly based on factors such as condition severity.

In the condition’s early days, it rarely produces noticeable functional deficits, and often, postural changes are too subtle for anyone other than an expert to notice; this can make it difficult for a person to be aware of what is happening in their body until the condition starts producing more noticeable symptoms.

The most common postural changes to look for involve an overall asymmetrical appearance to the body.

Uneven shoulders and hips are early postural changes to look for, along with arms and legs that appear to be hanging at different lengths. A rib arch is a sign most commonly associated with thoracic scoliosis (middle back), and basically, any indication that the body is becoming, or has become, asymmetrical could be an indicator for scoliosis.

Changes to How Clothing Fits

We all know how fast adolescents and teenagers outgrow their clothes, but if clothing suddenly seems to be hanging differently, this could be due to asymmetrical changes that are happening to the body.

There are a lot of uneven forces at work with scoliosis. As the spine bends and twists out of alignment, the body does its best to adjust.

This can shift the body’s center of gravity and make balance and coordination extra challenging. In addition, people with scoliosis can have problems with proprioception (the body’s ability to recognize its position without visual cues).

For someone without scoliosis, standing on one foot with the eyes closed is a simple task, but for people with scoliosis, this can be particularly challenging. 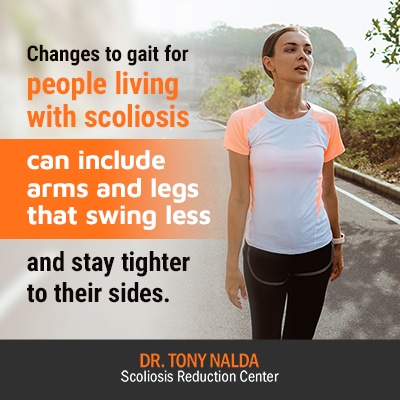 I can tell a lot about a patient’s condition by how they walk. Changes to gait for people living with scoliosis can include arms and legs that swing less and stay tighter to their sides.

A reduction in the normal counter-rotating motion in the hips and shoulders during walking can also become evident. If the motion itself seems asymmetrical, this is a potential sign of scoliosis.

I didn’t include ‘pain’ in the initial list of scoliosis signs to watch for because in AIS, pain is rarely part of living with scoliosis, so is not a reliable sign for the condition’s most common form.

In AIS, as they have not yet reached skeletal maturity, their spines are constantly growing, and this lengthening motion counteracts the compressive force of the curvature, which is what’s known to cause pain in adult patients.

Adults with scoliosis tend to experience pain very differently, and it is most often pain that brings adults in for a diagnosis. In fact, it’s not uncommon for cases of AIS to remain undiagnosed until adulthood, when more severe symptoms, like pain, signal the presence of the condition.

Headaches, however, due to fluctuating CSF (cerebrospinal fluid) levels and a certain amount of muscle pain can be part of both the adolescent and adult experience of scoliosis.

When the Puzzle Pieces Come Together

Often, we are like detectives, looking for clues to what is happening inside our bodies. When it comes to scoliosis, having one or two of the aforementioned signs present doesn’t necessarily guarantee that scoliosis is an issue.

Sometimes, issues with postural changes are little more than just chronic bad posture, which is not the same as scoliosis, or awkward changes associated with puberty; however, what the presence of any number of these signs does indicate is a need for further testing.

Scoliosis signs give us pieces of a puzzle, but it’s not until an official assessment and X-ray can be done that a complete picture emerges.

Considering the benefits of early detection, getting screened for scoliosis is never a bad idea, especially when some of the aforementioned signs are present.

Early diagnosis is essential when it comes to the best possible treatment outcome. The early signs of scoliosis can be subtle, so it’s especially important to be aware of the signs you should be looking for.

Uneven shoulders and hips are often the earliest postural changes to appear, and because abnormal curvatures have it in their nature to get worse over time, the sooner we can reach a diagnosis, the better.

When scoliosis is diagnosed early, it gives us the best chance to develop the most effective treatment plan, but it is still important to understand that even in some cases that are caught early, progression can still happen quickly despite our best efforts to control it.

That being said, in the vast majority of cases, there are huge benefits to catching a condition early and starting treatment, and knowing the signs of scoliosis to look for can most definitely lead to early detection and a better treatment outcome.