Scoliosis Symptoms - What Are The Symptoms Of Scoliosis?

Scoliosis is a complex condition not only because there are different types that can develop, but also because even within a single form, the condition’s symptoms can vary greatly. Knowing the condition’s most common symptoms can help lead to early detection and better potential treatment results.

The symptoms of scoliosis vary depending on a number of important variables such as patient age and condition severity. Age matters because once a person reaches skeletal maturity, pain is a common scoliosis-related symptom; when it comes to children and adolescents, the most common symptoms are postural changes involving the back, hips, shoulders, and shoulder blades.

While there are types of scoliosis with known causes, idiopathic forms are far more common. For our current purposes, we’ll take a look at some defining features of the condition’s most common form (adolescent idiopathic scoliosis) and how scoliosis most commonly develops in adults; then we’ll move on to discussing common symptoms and the difference between treating a symptom, or the condition itself.

As mentioned, adolescent idiopathic scoliosis (AIS) is the condition's most common form, accounting for 80 percent of known diagnosed cases; the remaining 20 percent have known causes such as congenital, neuromuscular, degenerative and traumatic.

AIS is diagnosed in individuals between the ages of 10 and 18, and the ‘idiopathic’ designation means there is no single known cause.

Adolescent idiopathic scoliosis patients are at risk for rapid-phase progression; this is because growth is the number-one trigger for progression. As an incurable progressive condition, this means that it’s in the nature of scoliosis to get worse over time, if left untreated.

As growth is the big trigger for progression, adolescents who are going through puberty, or just entering into that phase, are going to go through rapid and unpredictable growth spurts.

As a condition progresses, its symptoms tend to become more severe, and spinal curvatures that are larger are that much more difficult and complex to treat. That’s why, here at the Scoliosis Reduction Center, we are proactive and start treatment as close to the time of diagnosis as possible; we don’t want to waste valuable treatment time while a condition progresses unimpeded.

An important thing to understand about AIS, and scoliosis in general, is that every case is different and produces its own set of symptoms. A big factor that impacts symptoms is condition severity, and that’s determined by what’s known as the patient’s ‘Cobb angle’.

Cobb angle is important because it places a condition on its severity scale and helps guide the treatment plan moving forward.

A patient’s Cobb angle helps determine how misaligned a scoliotic spine is and classifies a condition as mild, moderate, severe, or very severe.

Cobb angle is obtained via X-ray and involves drawing lines from the tops and bottoms of the curvature’s most-tilted vertebrae (bones of the spine); the intersecting lines form an angle that’s measured in degrees.

This is important information because it tells us how severe a condition is and gives us an idea of ‘likely’ symptoms a patient will experience. I say ‘likely’ because every case is as unique as the patient themselves.

Just as there is no clear way of determining what a patient’s rate of progression will be, there is also no one-size-fits-all experience of scoliosis, including symptoms; that being said, there are some symptoms of scoliosis that are common to both adolescents and adults.

Although scoliosis is far more common amongst children and adolescents, adults can develop the condition too.

There are two main forms of scoliosis in adults: degenerative and idiopathic. In degenerative scoliosis, the spine becomes misaligned due to the degenerative effects of aging and/or the cumulation of certain lifestyle choices.

It’s most commonly the intervertebral discs that are affected by degeneration, and as they start to erode, the spine’s flexibility, strength, and ability to evenly distribute mechanical stress is impaired; as a result, the spine is no longer able to maintain its natural and healthy curvatures, leading to the development of scoliosis.

When an adult is diagnosed with idiopathic scoliosis, these are cases of AIS that progressed into maturity. As mentioned, depending on condition severity, symptoms can be subtle and difficult to notice, which is why so many people are unaware they have the condition.

In these cases, it’s most often pain that alerts them to the fact that there is something wrong, and it’s this pain, often felt in areas of the body other than the back, that brings them in to see me and leads to a diagnosis.

Pain, as a scoliosis symptom, differs greatly depending on a patient’s age. In children and adolescents whose spines are still growing, the lengthening motion of growth counteracts the compressive force of the curvature; it’s the compression of the spine and its surrounding muscles, vessels, and nerves that causes pain in adults who have reached skeletal maturity and are no longer growing.

Additional symptoms of scoliosis in adults would include a pronounced lean to one side, uneven shoulders, or the presence of a rib hump. Often, these types of symptoms that affect a person’s posture and body symmetry are more pronounced when bending over.

While living with scoliosis means living with certain symptoms, not everyone experiences their condition the same way; however, the following seven symptoms are so common, they are generally considered as signifiers of the condition, or the reality that it’s progressing.

Scoliosis symptoms can range from subtle to overt, which is why so many people are unaware of the condition’s presence; another reason for that is, quite simply, that people don’t know what the condition’s telltale signs involve.

Following are seven scoliosis symptoms I think people should be aware of as they are the most common and reliably indicate the condition’s presence.

For children and adolescents, scoliosis-related postural changes that involve the body’s symmetry will be the most obvious symptom. When a person is affected by scoliosis, it’s often the back, shoulders, and hips that start to take on an asymmetrical appearance and seem off-center.

These are some key indicators, related to posture and body symmetry, to watch out for:

Pulmonary function refers to how well the lungs perform, and this can be impacted negatively by scoliosis. The larger the curvature, the more likely it is that it will pull on the rib cage, distorting its position, and placing pressure on the lungs.

When this happens, there can be less space for the lungs to fully inhale/exhale. In most cases, scoliosis-related lung impairment is most noted during times of intense exercise, but in extreme cases, it can also be evident during times of rest.

As scoliosis affects the spine and the spine works in tandem with the brain to form the body’s central nervous system (CNS), the condition can lead to pain and discomfort.

Chronic and persistent pain in the neck, back, or legs is more common in adults, and muscle tension and frequent headaches, some reaching migraine status, are also associated with scoliosis as an abnormal spinal curvature can disrupt the flow of cerebrospinal fluid (CSF) through the spinal canal.

Scoliosis can affect multiple areas of the body in a myriad of ways. As the excess curvature of the spine can lead to general pain and discomfort, this can negatively impact a person’s ability to get comfortable and have a good night’s sleep.

This one often surprises people, but scoliosis also has the potential to disrupt a person’s digestion. As the spine is connected to virtually every system at work within the body, an abnormal curvature can impact the digestive tract as much as it can affect the muscles located closely to the spine.

This most commonly leads to difficulty digesting food and an inability to experience proper bowel function.

The nerves that travel through the spine connect the brain to the rest of the body, including its internal organs, and this is why sleep, digestion, overall comfort, and even menstruation cycles can become disrupted by the condition’s effects.

While an average person would likely find standing on one leg with their eyes closed for 30 seconds a simple task, for someone with scoliosis, this is not the case. ‘Proprioception’ refers to the body’s ability to recognize its position without visual cues, and this is affected adversely by scoliosis.

Balance and coordination commonly suffer as a result of scoliosis, as does a person’s ability to maintain equilibrium.

Now, depending on the treatment approach a patient chooses, treatment can involve addressing the above symptoms on their own, or their underlying cause, which is the condition itself. 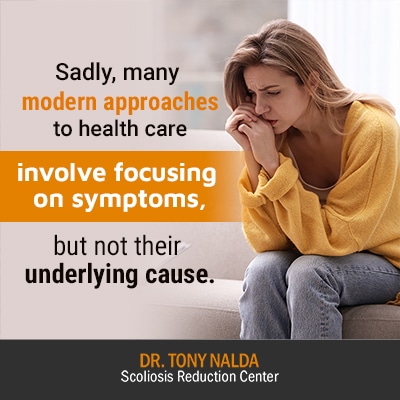 Sadly, many modern approaches to health care involve focusing on symptoms, but not their underlying cause. This is why so many people end up living with chronic pain and issues that rob them of a certain quality of life, because they are merely medicating, rather than getting to the root of the problem.

Just as a fever is a symptom of a larger issue and a person can take medication to lower the fever, unless the underlying cause of that fever is discovered and addressed, the problem is likely to reoccur; the same can be said of scoliosis. While a person can take pain medication for scoliosis-related back pain, this won’t impact the condition on a structural level, and in fact, can cause potential harm by masking progression.

I know a proactive and functional treatment approach works for my scoliosis patients because I see the results every day. With some dedication and hard work, most of my patients see results in the form of pain relief and/or a curvature reduction in a matter of weeks.

There are a lot of benefits to early detection when it comes to progressive conditions like scoliosis. Knowing the most common signs and symptoms to watch for could be the first step on the road to a diagnosis and effective treatment.

While there are some common symptoms such as postural changes, lung impairment, headaches, trouble sleeping, digestive issues, irregular menstrual cycles, and balance issues, pain figures more prominently into how adults experience the condition, rather than adolescents.

What I want patients and their families to be aware of is the important difference between treating a symptom of a condition, and the condition itself. Here at the Scoliosis Reduction Center, we don’t just want to give our patients temporary relief from scoliosis-related symptoms; we want to get to the root of the issues and treat their underlying cause by impacting the condition on a structural level.