10 Degrees Scoliosis - What To Do? What Happens Next?

Part of the reason scoliosis is so often deemed a complex condition to treat is because it ranges greatly in severity from mild to moderate and severe to very severe.

In addition to having an unnatural sideways spinal curve with rotation, a minimum of 10 degrees of scoliosis is one of the parameters that have to be met to reach a scoliosis diagnosis. At 10 degrees, this is classified as mild scoliosis and what happens next depends on the chosen treatment approach.

Let’s start our discussion of mild scoliosis with some general condition information, including how a 10 degrees of scoliosis is measured.

While developing an unnatural spinal curve is bad, the spine’s healthy curves facilitate its optimal function by making it stronger, more flexible, and better able to absorb/distribute mechanical stress.

There are a number of spinal conditions a person can develop that involve the loss of one or more of the spine’s healthy curves, and when this happens, the biomechanics of the entire spine are disrupted.

Spinal conditions have the potential to cause a myriad of effects felt throughout the body as the spine and brain work in tandem to form the body’s central nervous system (CNS), and scoliosis is one such condition that also happens to be more prevalent than many realize.

In fact, scoliosis is the leading spinal condition amongst school-aged children, and the Scoliosis Research Society has current estimates of close to 7 million people living with scoliosis in the United States alone.

In order for a scoliosis diagnosis to be given, there are certain parameters that have to be met; there has to be an unnatural sideways spinal curve, with rotation, making it a 3-dimensional condition, and the unhealthy curve has to have a minimum Cobb angle measurement of 10 degrees.

So what is Cobb angle, and why was 10 degrees decided on as the diagnostic cutting point? 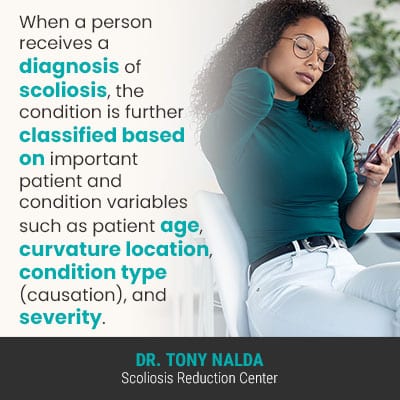 When a person receives a diagnosis of scoliosis, the condition is further classified based on important patient and condition variables such as patient age, curvature location, condition type (causation), and severity.

The classification points not only help to streamline the treatment process but also inform the crafting of effective customized treatment plans.

Condition severity is determined by a measurement known as Cobb angle that’s taken during X-ray by drawing intersecting lines from the tops and bottoms of the curve’s most-tilted vertebrae (bones of the spine), and the resulting angle is expressed in degrees and places conditions on a severity scale of mild to moderate and severe to very severe:

So how was the cut-off point determined to be 10 degrees, and what are the treatment options for 10 degrees of scoliosis?

As mentioned, a scoliotic curve has to measure at at least 10 degrees to be officially diagnosed as scoliosis; quite simply, 10 degrees was the decided diagnostic cutting point partially because a number had to be decided upon to streamline the diagnostic process and ensure that diagnoses were consistent.

An article was written in 1977 by Dr. William Kane entitled “Scoliosis Prevalence: A Call for a Statement of Terms” documented the need for consistency in the diagnosis and treatment of scoliosis.

In the article, the issue of variability is discussed as various medical professionals and scientists were using different curvature degrees to assess and diagnose scoliosis. The benefits to standardizing the management of scoliosis by introducing certain points when the condition was diagnosed, as well as when recommendations for certain aspects of treatment were deemed necessary were needed.

Dr.Kane himself admitted the somewhat arbitrary nature of suggesting that 10 degrees was the standard as 5 degrees was too mild, and 15 was too severe.

So once a 10 degrees scoliosis diagnosis is given, what are the treatment options moving forward?

There are two main scoliosis treatment approaches to choose between, traditional and conservative, and while the former funnels patients towards spinal fusion, the latter focuses more on achieving corrective results through proactive treatment.

Traditional is Watch and Wait

The traditional approach is more reactive than proactive, as in the majority of mild scoliosis cases, patients are told solely to watch and wait for signs of further progression.

As a progressive condition, we know that virtually every case of scoliosis is going to get worse at some point, so responding to a diagnosis of mild scoliosis with only monitoring is doing nothing to prevent increasing condition severity proactively. 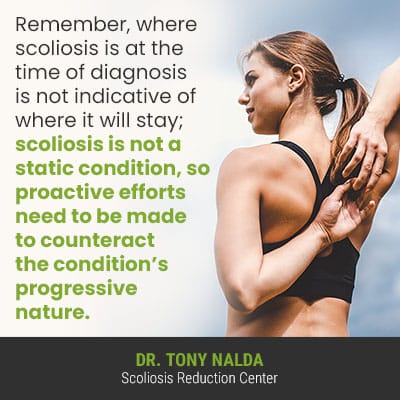 Remember, where scoliosis is at the time of diagnosis is not indicative of where it will stay; scoliosis is not a static condition, so proactive efforts need to be made to counteract the condition’s progressive nature.

In addition, depending on the treatment provider, an adolescent patient with a 10 degrees scoliosis is likely to be told to return at periodic intervals for assessment every 3, 6, or even 12 months.

Now in the condition’s most-prevalent form, adolescent idiopathic scoliosis diagnosed between 10 and 18, we don’t fully understand its etiology, but we do understand what triggers its progression: growth and development.

Considering the puberty stage, this age group is entering, rapid and unpredictable growth spurts could easily occur between periodic checkups, meaning a patient could significantly progress as the curve is left alone to progress unimpeded.

Once a patient progresses past the surgical-level threshold at 40+ degrees and shows signs of continued progression, these patients are commonly told that spinal fusion is their best remaining treatment option, but had proactive treatment been applied earlier on, that amount of progression might have been avoidable.

So what to do after receiving a mild scoliosis diagnosis and what happens next will depend on the chosen treatment approach. Fortunately, there is a modern and dynamic approach that offers patients different potential results.

Here at the Scoliosis Reduction Center, I favor a conservative, aka functional and chiropractic-centered, treatment approach that strives to preserve as much of the spine’s natural function as possible.

Unlike the traditional treatment approach that would respond to 10 degrees of scoliosis with watching and waiting, I respond with the application of proactive treatment as close to the time of diagnosis as possible.

I want to be proactive, particularly with my mild cases, because when successful, I can prevent progression, increasing condition severity, escalating symptoms, and the need for invasive treatment in the future.

While early detection doesn’t guarantee treatment success, it does increase its chances and means there are fewer limits to what we can achieve.

By integrating multiple forms of treatment, I can impact conditions on multiple levels, both structurally and in terms of increasing core strength, so the spine is optimally supported and stabilized by its surrounding muscles.

As a scoliosis chiropractor, I know the spine and how a scoliotic spine responds to treatment, so I can customize treatment plans to suit the patient and their condition type and adjust treatment disciplines to make them condition-specific.

Through chiropractic care, in-office therapy, custom-prescribed home exercises, and corrective bracing, I can help patients with a 10 degrees of scoliosis either remain at that severity level, reduce it further, or prevent further progression.

So what to do about a 10 degrees scoliosis and what happens next after being diagnosed with mild scoliosis, will depend on the chosen treatment approach.

Those who have chosen to commit to a traditional treatment approach are likely to experience watching and waiting, more so than proactive forms of treatment.

Those who have chosen to commit to a conservative treatment approach will experience a variety of proactive treatment forms applied as close to the time of diagnosis as possible.

The 10-degree parameter was determined as the diagnostic cutting point for scoliosis to standardize the assessment and diagnostic process, as well as streamlining treatment delivered by different medical professionals.

By integrating different treatment disciplines, scoliosis can be impacted on multiple levels for the best potential results that involve preserving as much of the spine’s natural function and strength as possible.