We spend a lot of time discussing scoliosis in terms of diagnosis, symptoms, and treatment, but there is also a psychological side. Part of the emotional response to a diagnosis can be linked to misconceptions about the condition. Individuals like Lamar Gant, a world-record power lifter, show us that scoliosis doesn’t have to be all-defining.

When I treat patients, I want to treat the whole patient, and that means acknowledging the many ways scoliosis can affect a person. Before moving on to Lamar Gant as a prime example of what can be accomplished with scoliosis, let’s spend some time on common condition misconceptions that can factor into a person’s emotional response to a diagnosis.

When a person receives the news that they have a medical condition or disease, they need time to process and absorb a lot of information.

At the time of diagnosis, patients are faced with many thoughts, questions, and fears that flurry through their minds.

While there is no right or wrong way to respond to the news of a scoliosis diagnosis, it can be disheartening to witness some of the highly-negative misconceptions out there regarding life with the condition.

Let’s keep in mind, too, that the most common age group diagnosed with scoliosis is adolescents between the ages of 10 and 18: adolescent idiopathic scoliosis (AIS). This is an already tumultuous time marked by insecurity and uncertainty. Add a progressive and incurable condition like scoliosis into the mix, and you can have one frightened teenager.

Often, many of the first concerns are cosmetic, and then questions about what type of life they can have: concerns over sports or activities they love and what their future holds.

While there can be some restrictions, depending on condition characteristics like age and severity, often these restrictions involve tweaking certain activities to make them more scoliosis-friendly or approaching them with caution and awareness.

While no sport or activity should be attempted without first discussing it with whomever is administering treatment, this does not mean a scoliosis diagnosis equates to a life of limitation.

One of the main reasons behind writing Scoliosis Hope, was to bring some positivity and feelings of control to patients and their families.

I also wanted to ensure that people understand there are more scoliosis-treatment options than ever before, and that spinal-fusion surgery should only be considered as a last resort, after other less-invasive treatment options were attempted and failed. 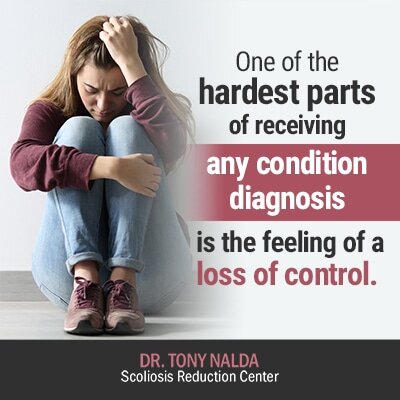 One of the hardest parts of receiving any condition diagnosis is the feeling of a loss of control. People trust their bodies, and the news that they have a progressive condition can make them question just how much control they have over their own lives.

A person can do everything right, check off all of life’s boxes, diet and exercise, but still develop scoliosis: a life-long condition. People can feel cheated and like they have no mastery or control over their own lives.

No one wants to feel powerless, and I really try to shape talks about scoliosis to include positivity and control. We might not fully understand why cases of adolescent idiopathic scoliosis develop in the first place, but that does not mean we don’t know how to treat and manage them effectively.

Here at the Scoliosis Reduction Center, we use an integrative functional treatment approach to help us stay ahead of the condition’s progressive nature and work towards achieving a curvature reduction, and this is how we manage and treat scoliosis effectively.

Knowing what to say to an adolescent recently diagnosed can be hard. Despite wanting to fix everything, in cases of medical conditions/diseases, this is not always possible.

For parents and caregivers of loved ones recently diagnosed, having an example or two of people who have succeeded with scoliosis, especially those in the public eye they may have heard of, can be a great positive response tool to expressed fears.

Pointing out that people like Gant likely had those same initial responses of feeling hopeless, cheated, and powerless, but for whatever reason, he decided that scoliosis was not going to write his script for him; he, instead, would rewrite his own script, but cast his condition in a lesser role.

One of the best examples I like to use is Lamar Gant, so let’s move on to his story and see what we can learn from his experience. 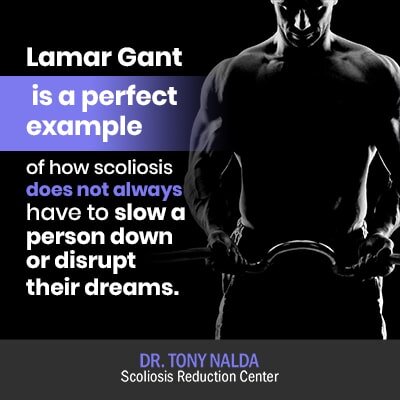 Lamar Gant is a perfect example of how scoliosis does not always have to slow a person down or disrupt their dreams.

Clearly, there are some cases that are very severe and can cause complications, but for our current purposes, we are looking at average forms of the condition and typical cases, such as adolescents diagnosed with AIS.

Lamar Gant currently holds the world’s powerlifting record: think about that for a second. Not only was Gant diagnosed with AIS when he was 14, but he went on to accomplish his life’s dreams.

Gant didn’t just ‘exist’ with his condition and go through the motions; he excelled with it.

Both Gant’s mother and grandmother had scoliosis, so when he was diagnosed at 14 during a routine football physical, he was not particularly surprised.

As AIS is so often a painless condition, this was also the case with Gant. Not only did he not let his condition discourage him, he decided to attempt powerlifting.

In 1980, Gant was inducted into the International Powerlifting Federation Hall of Fame.

In 1985, he earned a title as the first person to deadlift five times his body weight by lifting 661 pounds; at the time, he only weighed 132 pounds.

In fact, he still holds the world record for deadlifting in the 123-pound and 132-pound weight classes.

So what can we learn from Gant? Not only does he debunk a common scoliosis misconception that the condition is linked to muscle weakness, he shows what a person can accomplish when they don’t give in to the feelings of powerlessness or hopelessness that can accompany a scoliosis diagnosis.

Now, a few words do need to be said about weight lifting and scoliosis. As mentioned, every case is different, which is why there are no cut-and-dry rules about what a person with scoliosis can and can’t do.

While weight lifting can be done safely with scoliosis, every case is different with no general rule. This is why patients have to discuss it with their health-care provider to ensure the activity is safe for their individual condition, including certain weight-lifting moves that should be avoided or adjusted.

In addition, certain activities that might not be deemed safe during treatment, or certain phases of treatment, might be doable once active treatment has been completed.

When I think of Lamar Gant, I think of a person who could have let their scoliosis hold them back but made a different choice; instead, he continued pursuing his life’s passion, and despite the extra challenge of living with a spinal disorder, he excelled at it.

What we can learn from Gant is the power of positivity, drive, and resilience. He makes a great advocate for athletes remaining competitive after a scoliosis diagnosis.

Here at the Scoliosis Reduction Center, I see the connection between a healthy mindset and treatment success on a daily basis, and we do our best to present scoliosis differently than it was in the past.

There are numerous examples of famous people living with scoliosis, but Lamar Gant is one of my favorites not only because of his accomplishment, but how he debunks a common misconception that scoliosis is caused by, or causes, muscle weakness.

Thanks to advancements made in the understanding and treatment of scoliosis, the narrative surrounding the condition has slowly evolved.

I consider it part of my job to spread this new outlook on a condition that, at one time, was thought by many to drastically limit a person’s function, abilities, and life.

Thanks, in part, to examples like Lamar Gant, we know that is not the case, and these examples of people who have managed to thrive in life despite their condition are powerful motivators for others facing the same challenges.