Does Scoliosis Make You Tired? Fatigue and Scoliosis

Scoliosis is not a simple condition. From diagnosis to treatment, there are a lot of variables and challenges that shape a person’s experience with it. In the condition’s most common form, adolescent idiopathic scoliosis (AIS), early diagnosis can be a big challenge. The symptoms of scoliosis vary greatly from patient to patient and are very condition-specific, but some signs to look for are postural changes and fatigue.

Scoliosis is a progressive condition, meaning it’s virtually guaranteed to get worse over time. Starting active treatment while the condition is in its milder form has a lot of benefits in terms of ease and success of treatment. Pain and abnormal levels of fatigue are common clues that something is off balance in the body. As pain isn’t always a big part of scoliosis, changes to posture and increasing levels of fatigue can help indicate the presence of an abnormally-curved spine. Let’s start by exploring what’s happening in the body as scoliosis develops.

Scoliosis: What’s Happening in the Body

Scoliosis is classified as a spinal deformity. While the spine has three natural and healthy curves to it, people with scoliosis have a loss of those healthy curves.

The natural ‘S’ shape of the spine gives it its strength and flexibility. As scoliosis develops, a portion of the spine starts to bend unnaturally to the side and rotate. While this sounds extreme, it often goes unnoticed until the condition moves from mild into moderate and severe levels.

Once an abnormal curvature develops, it doesn’t just affect the portion of the spine that is bent and twisted; it throws off the biomechanics of the entire spine. While the body can do remarkably well with adapting to structural changes, the muscles surrounding the spine have to work harder than in an average person.

Before moving on to the big indicators that scoliosis is present, let’s discuss the condition’s most common form and why it’s not always easy to catch.

The condition’s most common form is adolescent idiopathic scoliosis (AIS), diagnosed in adolescents between the ages of 10 and 18. In this form, pain isn’t a common symptom. This can seem surprising, but for those moving into the puberty stage, growth is a constant occurrence.

While growth is the number one cause of progression, it’s also what keeps pain at bay in this age group. As the spine is experiencing a lengthening motion, it counteracts the compression that scoliosis places on the spine and its surrounding muscles and nerves.

In adults who have reached skeletal maturity, compression is the big cause of pain, and this is what brings them in to see me and leads to a diagnosis, if they don’t already have one.

In adolescents, this makes it that much harder to catch the condition in its early days. This can sound discouraging, but there are other signs you can look for, such as changes to posture and increasing levels of fatigue. 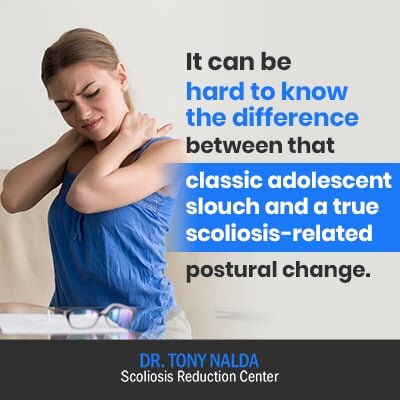 By far, the strongest and most noticeable indicator of scoliosis in adolescents is changes to posture, but this can be a challenge, considering the age group. It can be hard to know the difference between that classic adolescent slouch and a true scoliosis-related postural change.

Teenagers are often told to stand up straight. Between bad posture and the effects of too much screen time and looking down at phones constantly, this tendency can become chronic, but it’s still not the same as the structural nature of a scoliosis developing.

When the spine develops an abnormal curvature of more than 10 degrees that includes rotation, this becomes structural and is more than just bad posture. As scoliosis progresses, often with a big growth spurt, related symptoms and signs become more noticeable, assuming you know what to look for.

The most noticeable visual changes to look for that indicate the presence of AIS include:

Any number of these changes can range from subtle to overt, depending on the individual characteristics of the condition.

Another indicator for scoliosis is fatigue, and of course, keeping in line with discussing the condition’s most common form, this can cause another challenge: the difference between average teenage lethargy and a sign of the body struggling to adapt to a structural change isn’t always clear.

Does Scoliosis Make You Tired? Find Out Here! 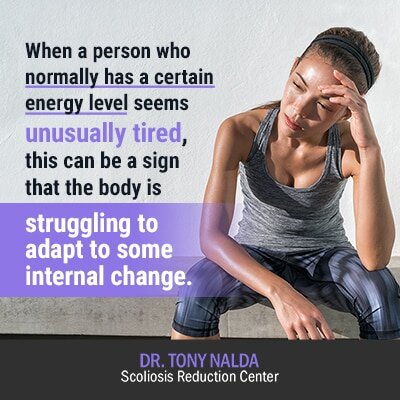 When a person who normally has a certain energy level seems unusually tired, this can be a sign that the body is struggling to adapt to some internal change. Whether it’s the immune system trying to fight off an invader, or the body’s muscles trying to adequately adjust and support a musculoskeletal change, abnormal levels of fatigue signal that something could be wrong.

When it comes to non-visual signs of scoliosis, fatigue is one to look for. As mentioned, scoliosis can range greatly in severity. The degree of curvature, plus the rate of progression determine if a condition is classed as mild, moderate, or severe.

The milder the condition, the less likely it is that fatigue and other symptoms will be present. The more severe a condition is, or the faster it’s progressing, the more likely a person is to experience symptoms such as pain, postural changes, and fatigue.

For those experiencing fatigue with their condition, they are most likely going to notice this after standing or sitting for long periods of time.

With an abnormal spinal curvature, the surrounding muscles have to work harder to hold balance and keep the body aligned as much as possible. The extra work and the uneven forces the muscles experience can tire them out and make them vulnerable to degeneration.

In addition, in severe conditions, related issues such as lung impairment can also emerge. Extra pressure and uneven force on the chest cavity, caused by the unhealthy spinal curves, can impair the ability to deeply inhale/exhale, and this can also cause chronic fatigue.

To return to the condition’s most common form, AIS, you can likely see how fatigue can also be perceived as merely an average characteristic of the teenage years. Moving into puberty is a huge and long phase of extreme growth and development, which is why teenagers do tend to need more sleep naturally. The key is knowing when fatigue is simply fatigue, or when it indicates something more.

For parents or caregivers who are unsure of whether or not their teenager’s fatigue is normal or abnormal, I would suggest considering the other signs. If your teenager seems extra fatigued, plus has some noticeable postural changes, this would warrant further testing by a medical professional and could be an indicator for scoliosis.

In addition to the aforementioned scoliosis-related causes of fatigue, there is also the all-important sleep factor.

Anyone who has had a disruption to their sleep knows how exhausting life can feel. If a person’s scoliosis is causing them pain, discomfort, breathing issues, or the body is just so tired from the extra strain, this can affect a person’s ability to get a good night’s rest.

If a person comes to me because their scoliosis is causing disruptions to their sleep, I would assess their condition, their sleep routine, current treatment plan, and adjust it accordingly. The most effective way to deal with any scoliosis-related symptom is to address the underlying cause of the condition; in scoliosis, this is structural.

While a general medical approach could be to prescribe sleeping pills or pain-relief medication, this is merely addressing the symptom and not the condition. The only way to alleviate a scoliosis-related symptom for the long-term is to achieve a structural change by reducing the curvature.

Here at the Scoliosis Reduction Center, first and foremost, we want to achieve a curvature reduction to impact the condition on a structural level. Then we combine multiple treatment disciplines such as chiropractic, therapy, rehabilitation, and corrective bracing to support and stabilize the spine. As the abnormal curvature is decreased, so too are related symptoms such as pain and fatigue.

While it might not be the easiest or quickest way to address scoliosis-related symptoms, active treatment is the only way to produce a positive change with long-term sustainable results.

So does scoliosis make you tired? The answer is yes, it can, or not necessarily. Each patient’s condition has its own set of characteristics that can range greatly in severity and produce a wide range of symptoms.

Any condition that puts extra strain on the body makes it work harder, and scoliosis is certainly an extra strain on a number of the body’s systems. As the brain and spinal cord work in tandem to form the body’s central nervous system, a spinal disorder can cause a ripple effect throughout the body.

Factors like condition severity, age of the patient, and lifestyle will impact whether fatigue plays a major or minor role in how a person experiences their condition. That being said, unexplained fatigue is always a good indicator of the body working extra hard for one reason or another. If this is present, paired with some of the other symptoms such as postural changes, some screening for the condition is never a bad idea.

Here at the Scoliosis Reduction Center, we have all the screening/diagnostic tools and experience needed to fully assess and diagnose any form of scoliosis. As diagnosis is the first step on the road to treatment, don’t hesitate to come in and see us if you or someone you love suspects scoliosis could be an issue.