As a progressive condition, it’s in the nature of scoliosis to worsen over time, and as growth and development are the main triggers for progression, children are at the highest risk for rapid-phase progression. The good news is that with the right type of treatment response, the condition is highly treatable.

Here at the Scoliosis Reduction Center, through a conservative chiropractic-centered treatment approach, we apply a proactive treatment that works towards a curvature reduction as close to the time of diagnosis as possible.

When it comes to child scoliosis, the most dangerous thing is when patients are told to return for reassessment after a certain period of time, often 3, 6, or even 12 months; this is characteristic of traditional scoliosis treatment.

As a progression condition, where scoliosis is at the time of diagnosis is not indicative of where it will stay; the severity levels of scoliosis are determined by a measurement known as Cobb angle that’s expressed in degrees and tells me how far out of alignment a scoliotic spine is:

Fortunately, a modern chiropractic-centered treatment approach has emerged over the years with proven results, but clearly, as a scoliosis chiropractor, I’m biased towards this approach, so have a listen to the following patient stories, told in their own words.

Sophia’s story highlights the importance of acting proactively, particularly when it comes to adolescent idiopathic scoliosis (AIS): the condition’s most prevalent form.

Listening to Sophia sharing how scoliosis made her feel different, look different, and walk differently shows how the effects of scoliosis aren’t just physical but have a very real emotional/psychological component.

With an 18-degree curve, Sophia was diagnosed with mild scoliosis.

Sophia had the support of her family, who made sure she was receiving chiropractic treatment, but unfortunately, Covid hit, offices closed, and Sophia’s scoliosis had to wait.

During the interim, Sophia and her family moved across the country to Florida, the home of my scoliosis treatment center. At that time, they started chiropractic treatment again, but upon assessment, it was evident that Sophia’s curve had doubled in size and was close to becoming severe.

Sophia found the intense treatment and equipment room intimidating at first, but after seeing the initial results, she realized that not only could she live a life without pain, she could also participate in the sports she loved.

While each case of scoliosis is unique, Sophia’s story highlights the importance of proactive treatment and the potential of a chiropractic-centered approach to not only make improvements to the condition but to deliver improved quality of life.

In January, Kaley went for a routine physical and was told she had mild scoliosis.

On the path of traditional treatment, she was told to watch and wait, and by March, it had progressed to the point of becoming visually noticeable; her rib cage was arched and her shoulder blades were uneven.

So her condition had gone from mild to severe in two months with a 44-degree curve, and she was given three options:

Kaley’s mother advocated for her daughter and, being displeased by those options, did her own research. 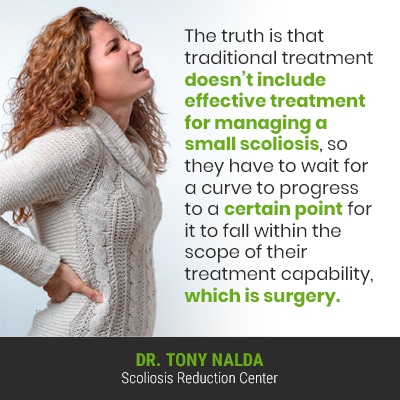 The truth is that traditional treatment doesn’t have effective treatment for managing a small scoliosis, so they have to wait for a curve to progress to a certain point for it to fall within the scope of their treatment capability, which is surgery.

Reducing a curve while it’s small is far better than allowing a curve to progress unimpeded and then trying to reduce it below surgical levels, which is why early detection can be so beneficial.

When Kaley expressed concern over how she looked, she was told that that was the way she looked and was going to continue to look; that answer wasn't good enough for Kaley’s mom.

The Boston brace is limited in its efficacy, and orthopedic doctors aren’t familiar with the ScoliBrace, but when the ScoliBrace is combined with other forms of proactive treatment like chiropractic care, in-office therapy, and custom-prescribed exercise, it can help increase spinal flexibility and reduce the curve effectively.

Kaley was severe, at 45 degrees, when she came to see me and was still progressing with growth.

Thanks to our intensive care, which is rapid high-dose short-duration treatment, within four days, her curve was reduced from 49 to 40 degrees. Even with that small reduction, her postural deviation was improved, and we continued from there.

The takeaway here is that there are non-surgical treatment options that I want patients, and their families, to be aware of because they can offer patients a different potential outcome that can have far-reaching effects.

Victoria’s story is one I love to share because it involves the gift of hindsight.

Victoria’s mom, Nicole, had been diagnosed at ten years old, at which time her mom said that her father, Victoria's grandfather, had scoliosis, and Nicole went through traditional treatment: Boston brace and spinal fusion from the T3 to the L2 vertebrae with Harrington rods.

Nicole looks back and realizes that she underwent an extremely invasive procedure; after having her own child, Victoria, she knew what to look for because there was that genetic risk factor. 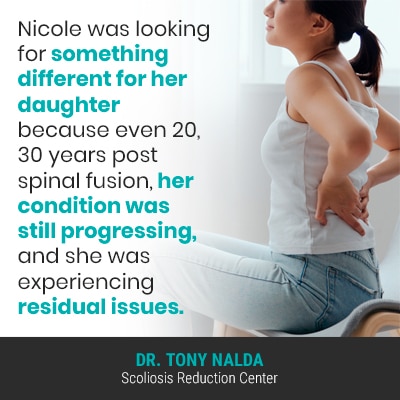 When Victoria’s parents noticed some asymmetries in their young daughter, they did their own research and were impressed with the CLEAR treatment protocols, which I follow.

Nicole was looking for something different for her daughter because even 20, 30 years post spinal fusion, her condition was still progressing, and she was experiencing residual issues.

When Victoria came to see me, I could see the potential for reduction and staying ahead of the curve because she was so young, and as we knew puberty was in the future, being proactive was key by starting treatment early and counteracting that progressive nature through growth.

Even at a young age, Victoria was motivated by seeing the results of proactive treatment; she was getting stronger, building muscle, and was able to run and play.

So while we still have a ways to go with Victoria’s treatment, we are working proactively now while she’s so young so that when puberty hits, and that progressive trigger of growth comes into play, she’s entering into the stage with the smallest possible curve, which greatly increases the chances of treatment success.

Ronica’s story resonates with me as the very reason I became a scoliosis chiropractor: to help patients regain control of their lives and avoid surgery that can set them on a different path.

With traditional treatment, the only treatment applied prior to surgery is bracing, and there are a number of shortfalls associated with the traditional Boston brace.

The improvement rate of the Boston is between 20 and 30 percent, whereas a modern ultra-corrective brace like the ScoliBrace has a 30 to 50 percent improvement rate; when combined with proactive treatment, it increases to between 70 and 80 percent.

After the Boston proved ineffective, Ronica was told that spinal fusion was her best option, which not only has the standard risks that apply to all surgical procedures but is known to reduce spinal flexibility and range of motion.

With the ScoliBrace, it’s not a one-size-one-time brace like the Boston; after all, how can one brace be enough when the adolescent body is constantly growing and changing.

After committing to an intense course of treatment here at the Center, Ronica’s curve was reduced from 53 to 23 degrees, addressing the pain and postural issues that were preventing her from modeling, and making her life’s goal of becoming a dancer a possibility once again.

Ronica’s reduction changed her life by making it possible for her to follow her dreams of enrolling in dance college which, to me, means she was able to become the person she was meant to be; had the surgery gone ahead as planned, the reduced range of motion in her spine could have cost her that dream.

While each of these children's scoliosis patient stories are unique, they have a common thread: parents advocating for their children by ensuring that they are fully informed on all treatment options available.

All of these stories started down the path of traditional treatment, but after learning about an alternative non-surgical treatment approach offered here at the Scoliosis Reduction Center, these children were able to avoid spinal fusion surgery and its associated risks.

Through proactive conservative chiropractic-centered treatment, these young patients were given the gift of a life full of possibility: the possibility of being pain-free, becoming a dancer, and moving towards puberty, prepared for the challenges of the condition.

So if there is one thing I would like viewers to take away from these videos, it’s that information is power, and being informed on scoliosis treatment options can mean engaging in treatment that offers the best potential outcome throughout treatment and beyond.