Can Scoliosis Kill You? Can Someone Die From Scoliosis?

On its own, scoliosis cannot kill you. While leaving a condition untreated would allow it to progress unimpeded and increase chances of related complications, even with severe curvatures, functional deficits aren’t always present. Another thing to keep in mind is that treatment can come with its own risks, such as with spinal-fusion surgery.

Before we move on to extreme forms of the condition and potential outcomes, let’s first take a look at what would happen in a typical case of adolescent idiopathic scoliosis (AIS) if it was left untreated.

A good indicator of just how serious a condition is is what happens if it’s left untreated. As mentioned, the most common form of scoliosis is adolescent idiopathic scoliosis diagnosed between the ages of 10 and 18.

The big factor in treating this form is progression. We know that all forms of scoliosis are progressive, and as the biggest trigger for progression is growth and development, adolescents are at a high risk of rapid progression.

Here at the Scoliosis Reduction Center, regardless of age or condition form, we always want to start active treatment as soon as possible; that way, we are treating the condition in its mildest form, before it naturally progresses in severity, and valuable treatment time isn’t wasted.

In mild and moderate forms of the condition, scoliosis can be difficult for an average person to spot. While a scoliosis specialist who knows exactly what indicators to look for might be able to spot some early postural changes, most people, including those with the condition, would find this difficult. 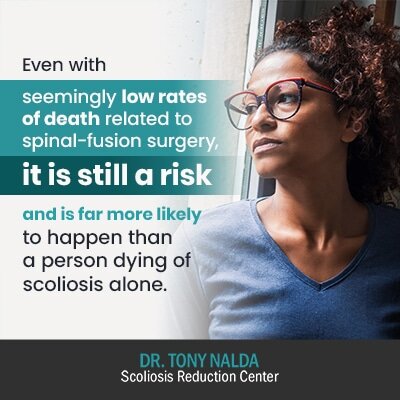 Another reason so many cases of AIS go undiagnosed is because scoliosis is rarely a painful condition while the spine is still growing; this is why it’s not uncommon for these cases to go undiagnosed, until the patient reaches skeletal maturity and can feel that something isn’t right.

So if an average case of AIS was left undiagnosed and untreated, that person wouldn’t die; most likely, they would continue on with their life, unaware that their spine had an abnormal curvature and rotation, until the condition progressed enough to start producing symptoms such as noticeable changes to posture and pain.

This leads us into what would likely happen if an adult with scoliosis was to live with their condition untreated.

With adults, the main thing that brings them in to see me and seek treatment is pain. Once an adolescent with scoliosis reaches skeletal maturity in adulthood, their condition can start to become painful. As the spine is no longer growing and lengthening, it, along with surrounding vessels, nerves, and muscles, starts to feel the effects of compression from the abnormal curvature.

So if an average case of adult idiopathic scoliosis is left untreated, it will continue to progress at varying rates. With the absence of growth as the big trigger, progression in adults is likely to be slower than in adolescents.

The thing to remember with adult idiopathic scoliosis is even if the rate of progression is slow, over time, the cumulative effect can be significant; even still, a large curvature on its own will not cause death.

In the other common form of adult scoliosis, adult degenerative scoliosis (ADS), progression tends to be faster as the scoliosis is paired with the natural degenerative effects of aging experienced by the spine and its intervertebral discs. If this form were left untreated, related symptoms such as pain would become more of an issue, but again, death would not be a result.

With addressing the question of whether or not scoliosis can cause death, I feel there is also an interest in extreme forms of scoliosis: the ones a person would likely assume to have the worst potential consequences.

As mentioned earlier, the condition’s most common form is AIS, and the ‘idiopathic’ designation means there is no known single cause. As this form accounts for 80 percent of known diagnosed cases, the remaining 20 percent have known causes, and one of these, in particular, does not come with the best prognosis: neuromuscular scoliosis. 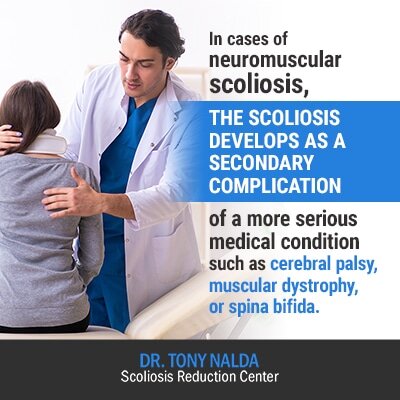 In cases of neuromuscular scoliosis, the scoliosis develops as a secondary complication of a more serious medical condition such as cerebral palsy, muscular dystrophy, or spina bifida. In this form, the scoliosis develops due to a disconnect between the brain and the muscles that support the spine. When it comes to treating these forms, the prognosis is not as positive as with typical forms of the condition because the larger medical issue has to be the focus of treatment.

It’s forms like these with severe curvatures that carry the potential for serious health complications such as lung impairment and mobility issues, known to impact overall health.

While I specialize in a functional scoliosis treatment approach, the traditional treatment approach that funnels patients towards spinal-fusion surgery carries potential for additional risks and complications, including infection and death.

In severe forms of scoliosis, or cases with curvatures that break 50 degrees, spinal fusion is a common recommendation with traditional treatment.

Can Scoliosis Surgery Kill You?

While we have determined that even when left untreated, the vast majority of scoliosis cases would simply progress with the potential to produce more noticeable symptoms and discomfort, choosing to treat your scoliosis with spinal-fusion surgery does come with additional risks, including death; however, this can also be said of any invasive surgical procedure.

Often referred to as ‘scoliosis surgery’, the actual name is ‘spinal fusion’, and during this invasive procedure, the most-tilted vertebrae of the curvature are fused together to form one solid bone. Most often, rods and screws are attached to hold the vertebrae in place while they heal.

As the goal of spinal fusion is to stop progression, this eliminates movement in the fused portion of the spine. Based on the goal of surgery, you can see that it does nothing to ‘correct’ the abnormal curvature on a structural level, which is our approach here at the Center.

In addition to the monetary cost of surgery, it comes with other high costs such as loss of flexibility in the spine, and the psychological effects of living with a fused spine.

With any type of diagnosis, often one of the first thoughts is, “Can this kill me?” The same can be said of someone who receives a scoliosis diagnosis; they are also going to naturally wonder if the condition can kill them.

As I’ve said many times, scoliosis is a complex condition that can take many forms and develop a wide variety of symptoms. Typical forms of the condition are not known to cause death, even if left untreated; however, more severe forms that develop in conjunction with other serious medical issues, such as neuromuscular scoliosis, can have less than favorable outcomes.

In addition, depending upon the type of treatment a person chooses, this can come with additional risks and complications, such as with spinal-fusion surgery. While any surgery comes with risks, spinal fusion is a particularly lengthy and invasive procedure. While death is not a common complication of scoliosis surgery, it does occur and is more common than a person dying from an abnormal spinal deformity on its own.

There is also a big gap in the research documenting long-term effects of spinal fusion; this is why I favor a functional approach that achieves a structural change safely and with few, if any, side effects.

Like many medical conditions, it’s far more common to die with scoliosis, than it is to die from it.