Can Scoliosis Cause Legs to Collapse While Standing?

When it comes to the postural collapse that would cause legs to give way while standing, this is not a common problem in the majority of scoliosis cases; however, with elderly people living with degenerative scoliosis, this can occur as a complication.

The Primary Age Group of People with Scoliosis

To fully answer the question of how likely postural collapse can be with scoliosis, the age group that most commonly faces the condition should be addressed.

The majority of scoliosis cases are adolescent, with the largest group of people receiving a scoliosis diagnosis between the ages of 10 and 18. For this group, postural collapse is highly unlikely. In fact, most of my patients with adolescent idiopathic scoliosis don’t experience noticeable symptoms until the condition has progressed in severity.

The absence of noticeable symptoms is the reason so many scoliosis cases either go undiagnosed or aren’t diagnosed until the condition has been progressing unimpeded for quite some time.

This is part of the reason I wrote my book Scoliosis Hope, to educate people and caregivers on the early signs of scoliosis. With any progressive condition, early diagnosis is key. The earlier a condition is caught, the sooner treatment can be started. Patients who come to me early on in their condition, or that I diagnose while the condition is in the mild stage, experience greater levels of successful treatment.

While legs collapsing is not a common symptom of scoliosis, that can be said because the majority of individuals diagnosed with the condition are adolescents. For adolescents, the scoliosis spine is very different than adult patients facing the degenerative effects of aging.

The importance of seeking treatment for scoliosis is also important for adults as progression can still be a factor, especially for those over 50. Most adults realize there is something wrong happening in their bodies when they experience one or more of the following symptoms:

As most of my adolescent patients are diagnosed with idiopathic scoliosis, meaning there is no known single cause, it stands to reason that many of my adult patients were those adolescents that were never diagnosed and progressed into adulthood with the condition.

While idiopathic scoliosis is by far the most common type of scoliosis in both adolescents and adults, there are a few rare causes of scoliosis developing in adulthood:

The above cases are extremely rare, and the fact is that most cases of adult scoliosis, just like adolescent idiopathic scoliosis, develop due to a complex combination of unknown variables.

Adults with idiopathic scoliosis can still experience curvature progression anywhere from half a degree to two degrees a year. For adults over the age of 50, the rate of progression can increase. 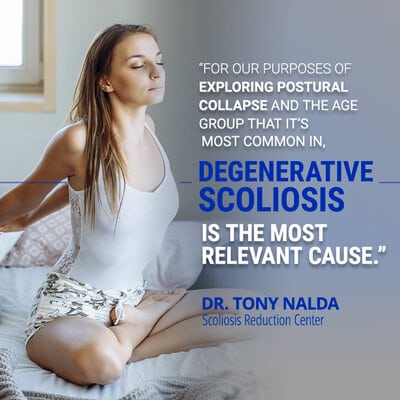 For our purposes of exploring postural collapse and the age group that it’s most common in, degenerative scoliosis is the most relevant cause.

When an adult with scoliosis ages, the spine ages along with the rest of the body. The spine, along with its supporting ligaments, degenerates over time. This can cause lateral listhesis to happen: vertebrae shifting to the side. It is at this point that postural collapse is a possibility.

In addition to the natural changes the spine faces through aging and arthritis, degenerative scoliosis is associated with degenerative disk disease, a thickening of the ligaments that support weakened spinal bones, and an impairment of the posterior spine’s small joints.

While scoliosis in younger patients is known largely as a painless condition due to the absence of compression on the spine during growth, aging adults experience scoliosis-related pain very differently.

Most often, a curvature caused by degenerative scoliosis leads to nerve pain. As growth is not occurring in adult patients, the curvature causes compression of the spine and its surrounding nerves and tissues, causing pain and discomfort.

This nerve pain can radiate down the legs and cause intense lower back pain. This can eventually lead to postural collapse.

Let’s delve a little further into the structures and degenerative changes that can lead to lateral listhesis and postural collapse.

When my adult patients come to me with degenerative scoliosis and I can see that vertebra slippage and disc degeneration is an issue, treatment can be challenging. The older a patient with scoliosis is and the more severe their curvature is, the more degenerative effects their spine is going to face.

As falls are the number-one cause of death and injury in elderly people, my goal is to stabilize them to the point where walking and standing is possible. When one of my elderly patients becomes immobile, I know the likelihood of them having a serious fall or fracture, as a result, increases exponentially. 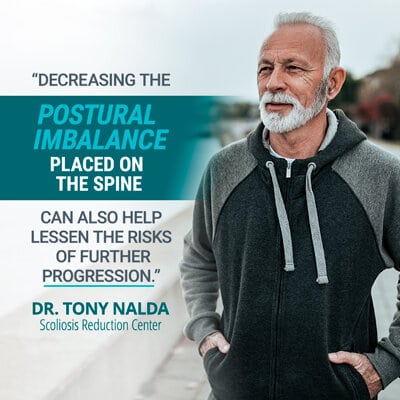 Scoliosis-specific exercise and chiropractic care can still be effective at this stage. Not only can we gain stability, we can also recover some degree of postural collapse that has occurred. While these positive treatment results can’t reduce degenerative changes that have already occurred, they can improve my patient’s upright posture to prevent collapse. Decreasing the postural imbalance placed on the spine can also help lessen the risks of further progression.

While scoliosis itself is unlikely to cause postural collapse in the majority of patients, in adult and elderly patients, it can cause destabilizing complications that can lead to postural collapse. As the spine is not immune to the effects of aging, it’s natural for it to degenerate over time. An adult with degenerative scoliosis experiences these effects intensely and can experience a number of additional complications

Once vertebral slippage has occurred, there is a danger of postural collapse and the legs giving way as a result. Most common in adults over the age of 50, this can lead to postural changes that exacerbate the problem and can lead to dangerous falls and fractures. When a patient comes to me at this point, my goal is to use scoliosis-specific exercise and chiropractic care to stabilize them to the point where they can walk and stand safely.

While scoliosis can cause legs to collapse while standing, this is largely a danger associated with elderly patients living with degenerative scoliosis. The majority of my patients live fulfilling lives with their condition and can maintain mobility and physical activity throughout their lives; in fact, the more active, fit, and healthy my patients are, the better they respond to treatment.