Can Scoliosis Cause Back Pain? [ANSWERED]

While pain isn’t a common part of the scoliosis experience for children and adolescents, back and/or radicular pain is the main scoliosis symptom in adults. Keep reading to find out why age makes such a big difference in terms of whether or not scoliosis is likely to cause back pain.

Scoliosis develops across a wide severity spectrum of mild to very severe; there are also multiple condition types with varying causative sources and treatment needs. Scoliosis can cause back pain, but it’s more common in adults, severe forms, or if a condition is left untreated.

Let’s start our exploration of scoliosis and back pain by first discussing the condition, then comparing the adolescent and adult experiences in terms of common symptoms.

A person diagnosed with scoliosis has an unnatural sideways spinal curve with rotation, and a Cobb angle measurement of 10+ degrees.

Based on the Cobb angle, conditions are classified on a severity scale of mild to moderate and severe to very severe:

The condition’s most-prevalent form is adolescent idiopathic scoliosis (AIS), diagnosed between the ages of 10 and 18.

Scoliosis is also progressive, meaning it’s in its very nature to worsen over time, particularly if left untreated or not treated proactively.

While we don’t fully understand the etiology of idiopathic scoliosis, we most certainly know how to treat it effectively because we understand its progressive trigger: growth and development.

I also remind patients, and their families, that knowing the cause of idiopathic scoliosis is unlikely to change the course, or outcome, of treatment; the real issue is how to respond to a scoliosis diagnosis when it’s given.

Regardless of age, or experienced symptoms, the right time for scoliosis treatment is always now because being proactive can counteract the condition’s progressive nature, prevent increasing condition severity, and the need for more invasive forms of treatment in the future.

Scoliosis is also at its easiest to treat when it’s mild, before significant progress has occurred, causing increasing spinal rigidity, and before the body has had ample time to adjust to the unnatural spinal curve’s presence.

So now that we’ve touched on some of the most important condition aspects, let’s move on to the different symptoms produced in young and older age groups.

Common Symptoms of Scoliosis in Adolescents

Remember, scoliosis can range in severity from mild to moderate and severe to very severe, and experienced symptoms can also vary based on important patient/condition characteristics such as patient age, curvature location, severity, and causation. 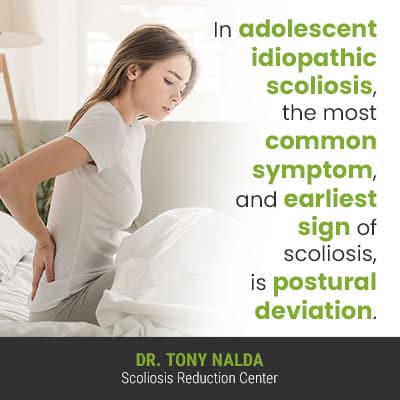 In adolescent idiopathic scoliosis, the most common symptom, and earliest sign of scoliosis, is postural deviation.

As scoliosis introduces a lot of uneven forces to the body, the main visual effect is a disruption to the body’s overall symmetry.

The earliest telltale signs of scoliosis in adolescents can include:

As a result of these types of postural deviations, clothing can become ill-fitting, and changes to gait, coordination, and balance can also develop.

Now, in terms of back pain, as mentioned, back pain isn’t a common part of the adolescent experience of life with scoliosis, and this is because it doesn’t become a compressive condition until adulthood when skeletal maturity has been reached.

While still growing, the lengthening motion of a growing spine counteracts the compressive force of a scoliotic curve, which is why most young patients with scoliosis don’t experience back pain.

So now, let’s move on to addressing back pain and scoliosis in adults.

Back Pain and Scoliosis in Adults

As mentioned, once skeletal maturity has been reached, meaning the body and spine is no longer growing, the condition becomes compressive.

What this means for adults with scoliosis is that the condition is likely to cause compression, not just of the spine but also its surrounding muscles, ligaments, and nerves.

The most prevalent form of scoliosis in adults is idiopathic, and these patients are cases of AIS that went undiagnosed and untreated during adolescence.

Idiopathic Scoliosis in the Adult

While it might seem difficult to imagine that a person could mature through adolescence with scoliosis unaware, remember, there are varying degrees of scoliosis, some mild, and in AIS, mild scoliosis isn’t known to cause overly-noticeable postural changes, functional deficits, and as explained, the condition isn’t commonly painful.

Although no one wants to experience pain, it does serve a purpose when it comes to early detection and diagnosis, which is why so many cases of AIS go unnoticed and undiagnosed until adulthood, when the condition becomes compressive and starts causing more-noticeable symptoms, like back pain.

The unfortunate reality is that had these patients received treatment during adolescence, their spines would be in far better shape than by the time they come to see me: before significant progression has occurred, before the spine has become more rigid, and prior to the body has had time to adjust to the unnatural spinal curve’s presence.

In addition, as adults age, there is also natural age-related spinal degeneration that comes into play, leading into the second most common type of scoliosis in adults: degenerative scoliosis.

How to Relieve Scoliosis Pain

Degenerative scoliosis is most common in adults over the age of 40 and involves natural age-related spinal degeneration.

Women are more likely than men to develop degenerative scoliosis due to changes in bone density/hormones related to menopause.

Most commonly, it’s the spine’s intervertebral discs that are the first spinal structures to show the effects of deterioration.

Disc desiccation or degenerative disc disease are significant factors when it comes to the development of degenerative scoliosis.

The discs sit between adjacent vertebrae providing the spine with structure (the vertebrae attach to them), facilitating flexible movement, and acting as the spine’s shock absorbers.

Because of the important roles the discs play in spinal health and function, if a disc loses excess fluid over time and becomes desiccated, it can lose height. Its change in shape can affect the position of adjacent vertebrae, causing a misaligned spine, and compromising its ability to maintain its healthy and natural curves: hence the development of degenerative scoliosis.

Bulging and herniated discs can also cause back pain, particularly when there is a degree of nerve involvement. For example, if a disc becomes herniated in the lumbar spine, it can pinch the sciatic nerve, causing back pain and radicular pain felt throughout the lower body. 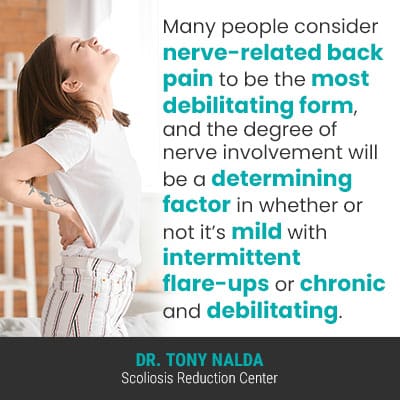 Degenerative, and other forms of scoliosis, can also lead to pinched nerves because of the unnatural spinal curve and the uneven forces it introduces to the spine and its surrounding muscles and nerves.

Many people consider nerve-related back pain to be the most debilitating form, and the degree of nerve involvement will be a determining factor in whether or not it's mild with intermittent flare-ups or chronic and debilitating.

So can scoliosis cause back pain: yes, it can, but it’s far more likely to be an issue in adult scoliosis, than it is for children and adolescents.

For those experiencing scoliosis-related back pain, it can range from mild and intermittent to chronic and debilitating and can feel like a dull ache or sharp shooting pains related to nerve involvement.

People with scoliosis have described condition-related back pain as a feeling of being excessively tight on one side of the back, being pulled to one side, or being weighed down. This is due to the uneven forces the condition introduces, and also how that adverse spinal tension affects the surrounding muscles that can become stiff and strained as they struggle to support an unnaturally-curved spine.

The best remedy for scoliosis-related back pain, and any other experienced symptoms, is a proactive treatment that addresses a condition’s underlying cause, and here at the Scoliosis Reduction Center, that’s exactly what we provide.

Through a conservative chiropractic-centered treatment approach, patients of the Center benefit from access to multiple treatment disciplines under one roof; through condition-specific chiropractic care, in-office therapy, custom-prescribed home exercises, and corrective bracing, I help patients work towards a curvature reduction on a structural level, while increasing core strength so the spine is optimally supported/stabilized by its surrounding muscles.